I've been saying this for a while, but yesterday the Wall Street Journal put it out in the main stream media-- the Common Core as a single unifying force in US public education is dead.

The actual headline for Michael Rothfeld's piece is "Financial Woes Plague Common-Core Rollout." But "plague" is a generous description of the situation Rothfeld describes.

Five years into the biggest transformation of U.S. public education in recent history, Common Core is far from common. Though 45 states initially adopted the shared academic standards in English and math, seven have since repealed or amended them. Among the remaining 38, big disparities remain in what and how students are taught, the materials and technology they use, the preparation of teachers and the tests they are given. A dozen more states are considering revising or abandoning Common Core.

In other words, the dream that Common Core would be the single educational vision of the entire country-- that dream is dead. Dead dead deadity dead.

But Rothfeld's piece lays out a not-always-recognized (at least, not by people who don't actually work in education) culprit for the demise. He lists the usual suspects-- politics, testing, federal overreach. But the article is most interested in another malefactor-- finances.

The total cost of implementing Common Core is difficult to determine because the country’s education spending is fragmented among thousands of districts. The Wall Street Journal looked at spending by states and large school districts and found that more than $7 billion had been spent or committed in connection with the new standards.

That's billion-with-a-B (and that rhymes with P and that stands for "Probably still underestimating the total cost"). WSJ looked at all sorts of records and figures that still doesn't count things like the training budgets that have been turned into Common Core training budgets.

Common Core advocates hoped to make standards uniform—and to raise them across the board. Their goals were to afford students a comparable education no matter where they were, to cultivate critical thinking rather than memorization, to better prepare students for college and careers, and to enable educators to use uniform year-end tests to compare achievement. They wanted to give the tests on computers to allow more complex questions and to better analyze results.

And he allows Vicki Phillips to repeat her claims about the awesomeness of Kentucky without being challenged. In fact, Rothfeld doesn't really challenge anything about the Core, and in a way, that's what makes this article so brutal-- whether the Core is any good or not is beside his point, which is that the whole business just isn't working, and it's costing a ton of money to boot.


The plan of having everybody take the same test failed, in part because they turned out to be hella expensive (or at least charged big ticket prices). So we can't really compare results. And the adoption of the actual standards? The WSJ has whipped up a cool little map: 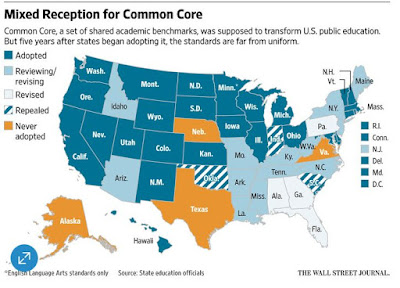 Rothfeld notes that people won't even say the name any more, but say "higher standards" instead. He quotes Council of Great City Schools executive director Michael Casserly insisting that Common Core still made US education better somehow, no matter how messy it has been. And then he turns back to examples of how expense sunk the whole process.

He uses Philadelphia schools as an example. The system had a large-ish grant, but then it had a financial crisis and dumped 4,000 jobs, including some people responsible for the implementation. Training is necessary but expensive (New Mexico spent $5.2 million to train half its teaching force). And now the grant money is running out, the work isn't done, and the states are already short the money they need to meet basic requirements of running schools.

We go back to Philadelphia for the most telling quote of the piece:

“It was something of a perfect storm, where expectations were rising while resources were diminishing,” says Christopher Shaffer, Philadelphia’s deputy chief of curriculum, instruction and assessment.

Dang-- it is like a perfect storm. It's almost as if someone wanted schools to fail, so that they would just have to be replaced by privately run schools set up to provide investment opportunities for hedge fund managers. But no-- that's crazy talk.

Finally, those computers that were going to allow "more complex questions" (seriously? exactly how is that supposed to work) and "to better analyze results" (yeah, we know how that's supposed to work). It turns out that buying computers for entire school systems is super-duper expensive as well-- millions of dollars for districts that are worried about new roofs and other non-frilly infrastructure.

There's plenty that goes unsaid in this piece, particularly about the actual merits of the Common Core, and in fairness to Rothfeld, that's kind of beside his point. Still, it's more likely that people will find a purchase "too expensive" if they discover they are purchasing something that is technically "a piece of crap."

And no, the Wall Street Journal does not, technically declare Common Core dead. They just describe how the body is laid out on a slab, its nationally unifying heartbeat stilled and its collective testing brain silent. Is a thing true if we describe the condition but don't say the word? I don't know. That's such a complex question that I need a computer to answer it.


Posted by Peter Greene at Tuesday, November 03, 2015
Email ThisBlogThis!Share to TwitterShare to FacebookShare to Pinterest