Want more proof, again, some more, of the connection between socio-economic status and standardized test results? Twitter follower Joseph Robertshaw pointed me at a pair of studies by Randy Hoover, PhD, at the Department of Teacher Education, Beeghly College of Education, Youngstown State University.

Hoover is now a professor emeritus, but the validity of standardized testing and the search for a valid and reliable accountability system. He now runs a website called the Teacher Advocate and it's worth a look.

Hoover released two studies-- one in 2000, and one in 2007-- that looked at the validity of the Ohio Achievement Tests and the Ohio Graduate Test, and while there are no surprises here, you can add these to your file of scientific debunking of standardized testing. We're just going to look at the 2007 study, which was in part intended to check on the results of the 2000 study.

The bottom line of the earlier study appears right up front in the first paragraph of the 2007 paper:

The primary finding of this previous study was that student performance on the tests was most significantly (r = 0.80) affected by the non-school variables within the student social-economic living conditions. Indeed, the statistical significance of the predictive power of SES led to the inescapable conclusion that the tests had no academic accountability or validity whatsoever.

The 2007 study wanted to re-examine the findings, check the fairness and validity of the tests, and draw conclusions about what those findings meant to the Ohio School Report Card.

So what did Hoover find? Well, mostly that he was right the first time. He does take the time to offer a short lesson in statistical correlation analysis, which will be helpful if, like me, you are not a research scholar. Basically, the thing to remember is that a perfect correlation is 1.0 (or -1,0). So, getting punched in the nose correlates about 1.0 to feeling pain.

Hoover is out to find the correlation between what he calls the students' "lived experience" to district level performance is 0.78. Which is high.

If you like scatterplot charts (calling Jersey Jazzman), then Hoover has some of those for you, all driving home the same point. For instance, here's one looking at the percent of economically disadvantaged students as a predictor of district performance. 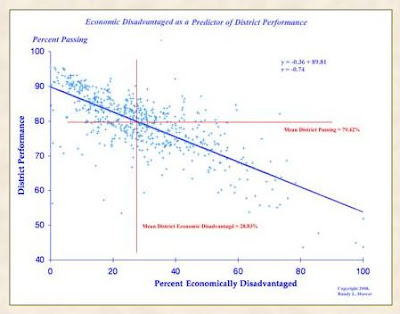 That's an r value of -0.75, which means you can do a pretty good job of predicting how a district will do based on how few or many economically disadvantaged students there are.

Hoover crunched together three factors to create what he calls a Lived Experience Index that shows, in fact, a 0.78 r value. Like Chris Tienken, Hoover has shown that we can pretty well assign a school or district a rating based on their demographics and just skip the whole testing business entirely.

Hoover takes things a step further, and reverse-maths the results to a plot of results with his live experience index factored out-- a sort of crude VAM sauce. He has a chart for those results, showing that there are poor schools performing well and rich schools performing poorly. Frankly, I think he's probably on shakier ground here, but it does support his conclusion about the Ohio school accountability system of the time to be "grossly misleading at best and grossly unfair at worst," a system that "perpetuates the political fiction that poor children can't learn and teachers in schools with poor children can't teach."

But this research does stand as one more data point regarding standardized tests and their ability to measure SES far better than they measure anything else.
Posted by Peter Greene at Thursday, November 19, 2015