Return of the Data Overlords

When the President and Arne Duncan took to all manner of media to pretend to stand up against standardized testing (but only, you know, the bad redundant not-so-good standardized testing), the New Testing Plan included some odd language and offers of assistance, and it all struck a chord of recognition for Peggy Robertson, an education activist who blogs at Peg with Pen.

For her, the signs point toward Competency Based Education. CPE has been floating around for a while, a kind of fig leaf for the educational dream of the Data Overlords. She has written pretty compelling and researched pieces about the whole business. Emily Talmage thinks the whole anti-test spin is a trojan horse. I don't think they're over-reacting.

We haven't heard from our data overlords in a while. When Leonie Haimson et al shut down inBloom and its dreams of hoovering up every speck of student data, too many folks heaved a sigh of relief and shrugged their shoulders. "Sure glad we're done with that." Well, we're not, and we never were.

If you doubt me, take a look at "Impacts of the Digital Ocean on Education." It's from Pearson way back in February of 2014, and it is one of many documents out there underlining the unique Pearson vision for students in the world. In fact, the textbooks, the instructional programs, the standardized tests, the huge mountains of profit-- all of those serve a central vision of swimming in the digital ocean. Here's a quote from that paper from Sir Michael Barber, the biggest Pearson Data Overlord of them all:

Got it? Even Pearson understands that Big Standardized Tests don't really get the job done, that what we really need to do is collect every piece of data from every piece of work that students do. You might argue (as I did) that teachers already do this every single day. But the Data Overlords have two problems with that. 1) Meat widgets like teachers don't record data as purely and beautifully as technology and 2) the data in teachers' heads is not easily accessible to the Data Overlords. They are more than happy to talk about getting rid of tests that will not fit in with the system they have in mind. In fact, testing isn't all that important to them if they can just capture ALL student activity data 24/7.

You can read more of the same in Pearson's eighty-eight page opus about the coming "renaissance in assessment" (or you can plough through the five posts I wrote about it after I read it. You're welcome). Again, here's just one pertinent excerpt:

Through the use of rubrics, which will define performance in terms of a hierarchically ordered set of levels representing increasing quality of responses to specific tasks, and a common set of curriculum identifiers, it will be possible to not only provide immediate feedback to guide learning and teaching but also to build a digital record of achievement that can be interrogated for patterns and used to  generate individualised and pictorial achievement maps or profiles.

Pearson is okay extending this collecting work to all aspects of the child, including "non-cognitive skills," so that the Data Overlords will not only know how good your child is at math, but how good a human being they are as well.

How would all of this work? I had a thought a few years back-- what if Common Core is not standards at all, but just a system of data tags? All the time teachers are spending "aligning" every lesson, every test, and even, in some cases, every item on every worksheet and assessment-- that's so that the results can be tagged and bagged and sorted to create a more easily crunched by the Data Overlords.

Look at this article from 2013, explaining how a symbiotic relationship between Pearson, their buddies/underlings at Knewton, and a school, would work. I can give you the gist of it in one image from the article. 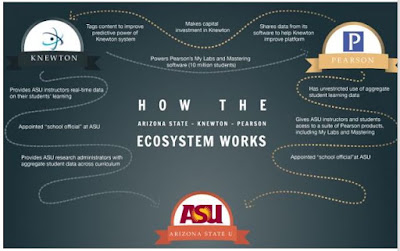 Or check out this video from a Knewton honcho

That video is from 2012, at an event presented by the Department of Education.

The basic ideas here have cropped up in the world of adaptive testing, personalized learning, and anything that involves putting a computer in front of a student. The idea of competency based "badges" for students is out there (and has also been floated for teachers).

After reading pages and pages of this stuff, I think the Dream of the Data Overlords looks something like this:

From early in a child's life (maybe even their fetal days), every interaction between the child and the world is collected and cataloged. By the time the child gets to school, we already know much about her, and she is met by a computerized education program shaped by what we know about her. And every exercise, practice, comment, sentence, comma or sneeze that she completes becomes part of her fully digitized record as well as being instantly used to direct her educational program to suit her. By the time she's twelve or thirteen, we know where she should best be positioned in life, and we can shape her educational program accordingly. By the time she finishes high school (or whatever sort of teen-years education program the software deems most appropriate for her), we know all about her intellectual capabilities and skills in rich detail, as well as a picture of her soft skills (aka her personality and character). This will allow us to perfectly match her with the best vocational/career fit.

Data Overlords believe that if we know everything, we can control everything. Data Overlords are in some ways the scariest of the reformster tribes because they are mostly True Believers who don't ask two critical questions-- 1) is it really possible to do all this and 2) is it a good thing to do. Personally, I go with "no" for both. Data Overlords know that they face some obstacles (if you thought Common Core was federal overreach, Knewton will totally freak you out). But  I'll finish with a Barber quote I frequently trot out, because I think it's his most scary statement.

Be that as it may, the aspiration to meet these challenges is right

At the end of the day, the Data Overlords believe that remaking the world in their own image is not merely a business plan or a great way to make a buck. They believe it is a moral imperative to impose their vision on the rest of the world. And that is scary as hell.
Posted by Peter Greene at Sunday, November 01, 2015