Is the Teacher Shortage Real?

A study released this month by the National Center for Educational Statistics suggests that everything we think we know about the Great Teacher Shortage is wrong. Or at least, it was wrong as of four years ago. The study is pretty straightforward, and it's worth making a note of.

The writers are Nat Malkus of the American Institutes of Research with Kathleen Mulvaney Hoyer and Dinah Sparks of Activate Research, Inc. AIR is also in the test manufacturing biz (SBA is their baby) and Activate is a "woman-owned small business" in the metro DC area focusing on research and policy. They created the report under the aegis of NCES, an arm of the USED Institute of Educational Sciences, so while none of these are without blemish, this is not another Gates-funded fake research project.

1) What percentage of schools reported teaching vacancies or hard-to-fill spots?

2) What percentage of schools found these positions related to particular subject areas?

3) Did persistent hard-to-fill spots correlate to any school characteristics?

The report is easy to read through and contains lots of charts, but the answers reached by the researchers are not necessarily what we might expect. Let me just hit the highlights.

Those percentages were also uniformly down for all subject areas, including math and special ed.

Title I schools have a harder time than non-Title I schools, but 2011-2012 was still better than all other years (I'm just going to write "pickle" every time this is the case, to save myself some typing.)

Large schools have it harder than small schools, but pickle.

I don't know what explains the pickle, and to their credit, the reports writers take a stance of, "We're just here to show you the numbers, not to make wild-ass guesses about why the numbers are what they are." The appendices give some number breakdowns and report on methodology, and while I am no trained stats cruncher, I don't see anything that sets off whopping alarms.

So am I thinking that I'll just stand down because the teacher shortage turns out to be all in my head? No. No, I'm not.

First of all, I have a certain amount of trust in my head, so I don't just throw away my head's ideas willy-nilly. I am , however, open to the notion that the teacher shortage is partly an artifact of the media's tendency to focus on a story thread and magnify it (e.g. the great shark summer of 2001).

In Pennsylvania, I know exactly why the numbers would reflect a not-shortage of teachers-- we've been shedding jobs left and right, dropping 2000-5000 teacher jobs (depending on who's counting) every year for several years. This is doing a great job of setting the stage for a teacher shortage, as college students repeatedly declare a major in Anything But Teaching. The ABT major is actually leading some college ed departments to shrink or collapse. The choking off of the teacher pipeline sets the stage for a combination of overcrowded classrooms and an actual teacher shortage.

My reading of teacher shortage bulletins is that teacher shortages are highly localized, and while the study's sampling of around 8,000 districts would ordinarily be plenty, I have to believe that the specific samples could make a huge difference.

But mostly what these results say to me is, "Holy smokes! We have plunged into a bad place very quickly over the last four years!"

Take for instance Scott Walker's Wisconsin. Here's a piece that lists the growing effects of Walker's gutting of the state's education system-- from November of 2011. In other words, the most recent data sampling in the study was being gathered just as Wisconsin schools were starting to feel the crunch. Quick quiz: have things gotten better or worse in Wisconsin since 2011?

Or North Carolina, another state that moved rapidly from a progressive education-supporting agenda to a state intent on driving teachers out.

Over the past four years, things have gotten far worse pretty quickly in schools across the country, from Race to the Top to Common Core testing. And in 2011, schools were seeing the last of federal stimulus money that allowed schools to keep hiring. When the stimulus money ran out, many districts starting cutting staff to match. 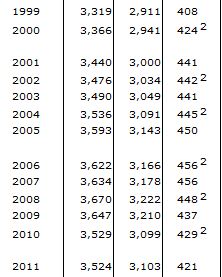 Take a look at this snip from the fed's chart on teacher employment. The first column is total teachers, column two is public, and column three is private (numbers are in thousands of teachers). 2011 is the last year for which we have hard numbers. Note that teacher employment peaked in 2008, and we've been declining since. Nothing like cutting 100,000 jobs to help reduce the number of vacancies you're trying to fill. Put another way, the study shows that 1999 was the worst in terms of unfilled jobs, but as we added more teachers, the vacancy percentages dropped. But then the last drop coincides with a drop in number of jobs to be filled. There are two ways to solve an unfilled vacancy problem, and we have now tried both. Which approach do you think is more likely to fix things in the long run?


I'm saving a link to this study, because I believe it sets the stage for what's to come. I expect that when the next data set is added from further inside the reformy abyss, we'll see charts with upward hooks. I believe that the story will be, "Well, things were getting better, but then ed reform switched into overdrive, and it all want to hell pretty quickly."In short, nothing in this report contradicts the perception that a troublesome teacher shortage has appeared in the last four years.

I get that the Teacher Shortage is a complicated issue, for reasons including the desire of everybody on every side of the education debates to use talk of the shortage to support whatever point they'd like to make. But this new report definitely doesn't make me think that everything's actually okay, and I look forward to seeing more data when it finally appears.

Email ThisBlogThis!Share to TwitterShare to FacebookShare to Pinterest
Labels: AIR, the profession