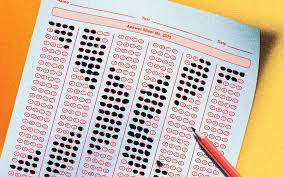 When schools pushed the pandemic pause button last spring, one of the casualties was the annual ritual of taking the Big Standardized Test. There were many reasons to skip the test, but in the end, students simply weren’t in school during the usual testing time. Secretary of Education issued waivers so that states could cancel their test (which is mandated by the Every Student Succeeds Act).

But that was last year.


This year, many states are already indicating that they will seek waivers again. South Carolina and Georgia have both announced their intention to get federal permission to skip the test. The Massachusetts legislature is considering a bill that would suspend the state’s MCAS exam for four years.

Meanwhile, thedepartment of education has signaled that it is not ready to let testing go. Discussing the waivers in a virtual press conference, assistant ed secretary James Blew said “Our instinct would not be to give those waivers.”

Instinct or not, there is no good reason to go through with the Big Standardized Test in the coming school year.

First of all, there’s the cost in time and money, both of which will be in short supply in the coming year. States are anticipating a financial crunch, and schools will need every possible minute to deal with the considerable challenge of starting and running a school ear in the midst of the pandemic. Any supposed benefits of testing must be weighed against the costs. So what would the benefits of testing be?

In that same conference, Blew also said, "Accountability aside, we need to know where students are so we can address their needs."

It’s not clear who “we” are in this statement. Teachers will certainly need to know where students are, but teachers are perfectly capable of doing the same sort of beginning of year assessments that they do every year—and they can get results far, far more quickly than the big tests can. For many reasons, the tests offer little actual utility for teachers, even in the best of “normal” years.

If the “we” Blew is talking about is state and federal government, that seems unlikely. Under both parties, the department of education has for years focused on punishment rather than assistance. We need not dig deep into the history for examples—it has been clear for months that schools need all manner of assistance, from PPE, to support and training for distance learning, to leadership and guidance about how to meet these unprecedented challenges. But the department has not chosen to address those needs, but has instead threatened to cut funding for schools that don’t fully open while offering no assistance in making such an opening safe.
“We need the data in order to give schools help,” has been a technocratic mantra for decades. It has resulted in the collection of a great deal of data and a very small amount of actual assistance.

Nor has that data been useful. At worst, test results are indicative of things other than actual student achievement. In 2016, Christopher Tienken and his research team showed that a school’s standardized test results could be accurately predicted with just three pieces of demographic data. American education researchers David Berliner and Gene Glass just compiled a reckoning of the many ways that the Big Standardized Test comes up short, including research showing that teachers could predict test results for their own students, meaning that the actual test results don’t tell teachers anything they don’t already know. Two years ago Jay Greene, head of the Department of Education Reform at the University of Arkansas, was writing about the disconnect in test scores, showing that raising a student’s test score does not raise the student’s “life outcome.”

Any data from tests next spring will be exceptionally useless. It certainly won’t be comparable to any other normal year’s results. Nor will it be possible to fairly compare individual schools, each of which has faced its own particular challenges in 2020. At best, the data will convey a message of, “The pandemic has made this school year veery different from any other.” There’s no reason to think we need a standardized test to draw that conclusion. In fact, some testing experts are suggesting that even the kinds of off-the-shelf diagnostic tests not required by ESSA are also best avoided this fall.

Administering the Big Standardized Test mandated by the federal government is costly and requires weeks of preparation above and beyond the big block of time required to actually administer the test. That kind of investment of time and money demands a solid return for aiding student education in this challenging time; that’s a return that the Big Standardized Test can’t deliver. They should be scrapped for the 2020-2021 school year.
Originally posted at Forbes.com