It's The Poverty, Stupid

As the discussion of Learning Loss drags on, with a big side of Blame It On The School Buildings Closures (itself with a big side of And It's All The Teachers' Fault), guess what we're not discussing.
Poverty and its relationship to student achievement.
If you're a regular, you know that I think most of what is being said about Learning Loss is bunk, an attempt to focus entirely too much attention on Big Standardized Test scores. 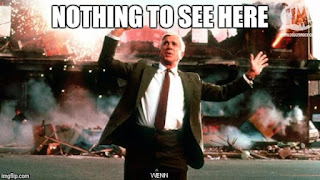 But if you're really concerned about this stuff, by any measure (and there's no question that the usual level of education didn't happen in the depths of the pandemess), then you have to pay attention to one particular factor.
The New York Times threw its hat into the Let's Explain This ring, and while they buy that remote learning may take some of the blame, it's not the major factor.
So remote learning does not explain the whole story. What else does? In a sophisticated analysis of thousands of public school districts in 29 states, researchers at Harvard and Stanford Universities found that poverty played an even bigger role in academic declines during the pandemic.

“The poverty rate is very predictive of how much you lost,” Sean Reardon, an education professor at Stanford who helped lead the analysis, told me.
This comes as a surprise to absolutely nobody who has been paying attention, because poverty level has always been predictive of scores on the BS Test (and to be clear, when we talk about "how much you lost," we're just talking about how much your BS Test score dropped). Always.
And after decades, we still don't know a sure-fire way to get poor kids scores up other than subject them to intense test prep at the expense of the rest of the full education that rich kids get--a deeply misguided and unfortunate effect of making the BS Test scores the be-all and end-all of schooling. And under political leaders of all persuasion, we have repeatedly doubled down on that on the theory that raising test scores would lift people out of poverty, even bring an end to poverty itself, an idea that belongs on the shelf somewhere between trickle-down economics and unicorn farming.
We actually know a good means of reducing child poverty in the US. We just reduced child poverty to record low levels in 2021 by way of expanding the child tax credit plus some other poverty mitigation measures during COVID, but we had to knock that stuff off, because our urge to make the lives of children better invariably takes a back seat to our other societal urges, like the one that says the poors should have to suffer the results of whatever bad choices or moral failings made them deserve to be poor in the first place.
So we're going to freak out loudly over the Learning Loss stuff, because there is money to be made in combatting the dreaded BS Test score drop. But to address the major underlying issue of poverty, we'll probably do nothing much. I can predict this based on the fact that poverty levels have been an issue in education for forever, and yet we get these kinds of solutions.
No Child Left Behind: You lazy teachers are just using child poverty as an excuse for not doing your jobs.
Charter school choice: We will "save" a tiny percentage of the poors, but only the ones we want, and maybe it will turn out that we don't actually know how to save them.
Testocrats: If they get high scores on the Big Standardized Test, they will stop being poor.
Teach for America: The poors just need some super-smart future ivy league grads to come teach them for a couple of years.
Race to the Top: See "No Child Left Behind"
Vouchers: This system in which they get a few thousand to spend as they wish won't make them less poor, and they still won't be able to get into great private schools, but at least their struggles will be their own problem instead of society's.
Never mind discussing solutions such as a living minimum wage so that working poor can be less poor. Universal health care. Or directing more necessary resources to schools serving poor families. And definitely not going to talk about ending the US standing as the only major nation in the world with no parental leave at all, because families are important and babies need nurturing, but not at any cost to employers.
Yes, as we sift through the pandemic data and focus all our attention on the debate about keeping buildings open or not, it will become increasingly clear that A) poverty creates a major hurdle for educational attainment and B) policy makers and thought leaders would much rather talk about something else.
Posted by Peter Greene at Tuesday, November 29, 2022
Email ThisBlogThis!Share to TwitterShare to FacebookShare to Pinterest