Aaron Churchill, the Fordham Institution's Ohio research director, popped up in the Columbus Dispatch today as a "guest columnist." It's worth noting that his job is "aimed at strengthening education policy in Ohio," which is of course not the same thing as improving education and certainly not the same thing as supporting public education. Churchill's previous job was program manager at Junior Achievement in Western PA; his college degrees are in History, Exegesis, and Public Policy and Management. 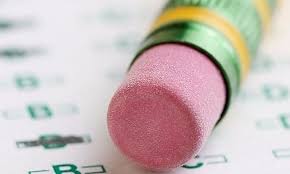 It helps to understand that Fordham is all in for school choice, that they in fact operate some charter schools in Ohio. Which explains a lot about Churchill's arguments here for making sure that Ohio administers the Big Standardized Test this year. The headline is "Don't cancel K-12 testing when we need data more than ever" and "we" is doing a lot of work here. But as testocrats keep pushing schools to waste precious time and money on testing this year, it's useful to understand what those testophiles are after.

Churchill opens with a quick recap--pandemic, closed schools, big mess, the usual. And in the midst of this, some folks are pushing to waive state assessments again this year.

"Huge blunder," says Churchill. Analysts predict big learning loss, "yet without state tests nobody can measure the size and scope of the damage. How many Ohio students have been knocked off course — and just how far off course? Which student groups have struggled most? Are the losses widespread or do they vary from community to community?"

This begs the question--who wants to know, and what will they do with the information? It can't be teachers, because they'll have a strong sense of how things are going in their classroom, even their school, long before any spring test.

"Ohioans," says Churchill, "be left in the dark." More importantly, "state and local policymakers won't be able to effectively target resources in recovery efforts." I have a radical thought about this--state and local policymakers could ask the actual educators working in the schools. But they haven't done so in the past. And they also haven't targeted resources in recovery efforts in the past.

Remember, Ohio is the home of HB 70, a bill that said that if a school's test scores were too low, they would be targeted for extra help and resources--ha, no, just kidding. School districts that had low test scores would be targeted for takeover, turnaround, and the option of charter conversion. The bill has yielded a handful of disasters, and highlights how, once again, test-centered school evaluation ends up not as a signal for leaders to send in the troops and the resources, but as a homing beacon for vultures. It's a fitting policy for the state that earned a reputation as a wild west for charter schools (the massive ECOT scam and scandal is just one example).

Timely state exam data would animate action, and empower leaders and parents with the information they must have to tailor effective interventions.

Well, it won't be particularly "timely" if the test is in the spring. But the inclusion of "parents" here suggests that the "timely intervention" Churchill has in mind is supporting charters and choice.

He offers some examples. Like tutors. Or local charitable organizations "might seek ways to supply extra support to students." It's entirely possible that a couple of decades of ed reformster nonsense has made me a bit cynical, but this smells like another voucher argument to me. And I can't help noticing that none of Churchill's examples or arguments say anything about getting public schools the resources and support they need to support student learning.

His final point is that parents deserve "to know where their children stand in respect to state academic standards," and he's not wrong, though there's an argument to be had about how useful those standards really are. Pandemic schools have, in some cases, eased up on some requirements. Whether or not the BS Test provides any useful answers is another topic to debate (spoiler alert: it's not).

Churchill winds up for his finish by citing a survey given by Ohio Excels, a lobbying group that is largely hostile to public education, so I feel comfortable ignoring any of their survey results.

Churchill pronounces the urge to cancel the BS Tests misguided, because with out it, Ohioans will be flying blind, but that's unlikely. And I'm not disagreeing with Churchill just because I think he mostly wants those test scores to goose the market for school choice and target public schools for further "disruption." Beyond that, we have the issue of students' actual education. This year has already been chopped into bits, with time and education lost to the problems of pandemic learning. Classroom teachers (largely without classrooms) are examining every single thing they choose to do closely, because time is short and precious and if something isn't going to deliver more education to those students. BS Tests, and the test prep necessary to get students through them, will not deliver more education for students.

BS Tests don't educate. Instead, they are the educational equivalent of the manager who demands that you keep providing detailed reports and presentations about the progress of your project, and then wonders why you're not getting the project done faster. Nothing should make it into the pandemic classroom that does not provide educational bang for the buck--and BS Tests require many bucks and provide barely a meek pop for students. Provides great tools for education "disruptors," but for actual students, not so much. We can find better things for students to do with their time this year.