Nobody Hates Miguel Cardona (So Far)

(OF course, I finished this post at about 3:55 PM Eastern time on Tuesday, so there's plenty of time left for folks to crank up the disapproval)

So now we know who the new guy is (probably) going to be, and an awful lot of folks are asking who he is and whether we should be delighted or upset or whatever.

Diane Ravitch notes that he hasn't taken a position on many of the hot-button issues, like charters. But she notes:

Having read his Twitter feed (@teachcardona), I get the impression that he is a very decent and concerned administrator who cheers on students and teachers. 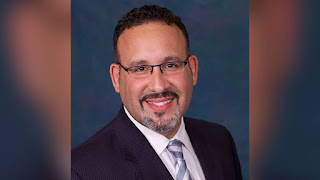 Lily Eskelsen Garcia said "I proudly support this nomination" and expresses confidence that Dr. Cardona "will ensure that the federal government's role in education is to provide access and opportunity for every student..."
At the74, Andrew Rotherham calls the choice "deft" and notes that Cardona has a good, inspiring up-from-poverty story (he does) and that "he doesn't fit cleanly into the reform or anti-reform camp." On charters, "he's a Goldilocks--not too hot or cold."
Jeanne Allen at the super-charter-loving and ultra-teacher-union-hating Center for Education Reform calls the nomination "intriguing" and calls the nomination "reminiscent of Rod Paige" (yuck) and likes that he's not rooted in the "platitudes of powerful interest group."
The Connecticut Education Association four days ago came out in favor of his nomination:
Miguel Cardona’s formative experience as a teacher and administrator has been critical to his accomplishments as Connecticut Education Commissioner. He has been tested by the unprecedented upheaval caused by the pandemic. While this challenge has been a rocky road — and many issues remain unresolved — teachers and school support staff have appreciated his openness and collaboration. If selected as Secretary of Education, Dr. Cardona would be a positive force for public education — light years ahead of the dismal Betsy DeVos track record.
Lots of folks have played the "he's not DeVos card" and that's a pretty easy card to beat. He's also not Arne Duncan. He has had a rapid rise in his career--he taught for about four or five years, became an administrator on the local level, then jumped up to the state level. "Youngest principal ever in the state" comes up a lot.
Hechinger has a nice recycled interview piece up about him. He appears to be a moderate on the Big Standardized Test (can be useful, don't give it too much power) and has been pro-re-opening the buildings, but seems to have maintained a decent relationship with teachers at the same time. I hear rumblings that some Connecticut teachers don't like him. He's apparently a Linda-Darling Hammond pick, and LDH has long been a figure of some controversy (or at least some spirited "what side is she on, anyway" arguments) in the education world. As Ravitch notes, the DFER crowd was pushing hard for someone more their style, and they didn't get that.
But at this point, nobody has jumped up to holler that he's awful and unacceptable, and he's probably not going to get a fight from the GOP senate.
There is nothing obviously and terrifyingly unqualified about him (I know--it's a low bar, but it's a low bar that hasn't been cleared in a long time). There are some question marks, and we've been burned before by folks who talked pretty and didn't do the walk to go with it. Educated in public school, public university system--that's a plus. He seems to fit my desire for someone who is non-adversarial with teachers. The years as an administrator could be a nice addition to his relatively few years in the classroom, if he isn't one of those guys who forgot everything he knew about being a classroom teach ten minutes after he landed an admin job. And lots of profiles mention his focus on kids, which could be a good thing but after years of listening to reformsters say "It's for the children" to justify every damned thing, I don't find that factor very soothing.
So, we'll see. It's worth remembering that these days, many of the big fights are going to be in the states and in the courts. But having somebody who's not totally incompetent, who's not disconnected from the actual work of education, and who does not arrive in DC with an bad news agenda that he's determined to push-- well, that would not be terrible. Relax, enjoy the holidays. It's going be weeks before we find out what we've really got for a new secretary.
Posted by Peter Greene at Tuesday, December 22, 2020