Children are not our future

There are plenty of warm fuzzy teacher sayings that I could well do without, emphasizing as they do that teachers are too noble to ever want to do things like, say, insist on being paid a decent wage or have control over their working conditions. But there's a child-focused saying that I would like to banish to the Island of Misfit Cliches--
Children are our future. Or, sometimes, children are the future.
The first is worse, carrying with it the notion children belong to us--and not just now, but in perpetuity, as if their adult selves will exist only to take care of the rest of us. "Shut up, kid, and get back to work. Grampa is going to need a new pair of shoes!"
But I object to both for other reasons. 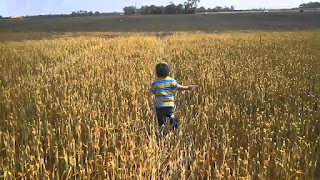 I hear in this cliche the echoes of a notion that children are empty vessels just waiting for Wise Adults to fill them up with knowledge and thoughts and values and all the other stuff that makes a person an actual person. Because, yeah, if they're empty vessels, they're not exactly persons, are they.
The modern version of this is to view them as a sort of empty hard drive, just waiting for programming to be added. I think this is part of the reason that the "science of reading" moniker rubs me the wrong way--the implication that one simply plugs or pours in this scientific programmy stuff, and that will result in every single child being filled up with proper reading stuff.
And, of course, if the child is an empty lot, we needn't look inside to see what's already there--we can just concentrate on what we want to see dumped into the child. We can build the child to order without having to pay attention to anything that might get in the way of the new structure we plan to build.
The emphasis on the future is also problematic, suggesting that the child's life isn't really going on right now, that their current life is just a staging area for the life to come. And yes--it's absolutely true that their childhood is the time in which we should help them build strong, robust, vibrant structures that will allow them to enjoy their life in years to come. Is that more true for a five year old than a thirty-five year old?
The idea of potentiality, the collecting of tools for future use--that's all important. But let's not get so focused on that that we forget that these children are living their lives right now. Let's not fall so far into this rhetoric that we start thinking that children will be, you know, real people some day, but not today.
Plenty of adults act as if children are a mystery, as if nobody can know how to talk to this alien species. There is no mystery. Children are people. People who haven't yet developed some physiological and psychological aspects, people without limited experience in the world, but people all the same. Not future people. People right now, today.
This "children are the future" talk makes it easy to justify the kinds of bad policy we've seen in the last few decades. Sure, let's start sitting them down to study academic subjects earlier and earlier because there's nothing about what's going on in a four-year-old's life right now that could possibly be as important as getting her packed full of employer-desired skills for the future. It's easy to deny childhood when you think that all of a child's Real Life is in the future.
"Children are the future" is often used as a motivational nudge for funding and/or supporting education and can feel like part of a larger conversation that started with "We don't need to spend money on that--they're just children." It's a conversation one would expect from people who measure a person's worth in their utility (in particular, their utility to employers). It's a hard conversation, because if you don't know that you should care about, look after, cherish and hold close our children, I don't know how to explain it to you. They are bundles of raw humanity, undiluted and unvarnished. That ought to be good enough.
"Children are our present" doesn't sing like the "future" version, but I think it's truer and important in that it doesn't let us push off our obligation to the young humans among us. They are here, with us, today, and deserve to be cherished and supported and seen and heard and embraced for all they are today. The future will come on its own, soon enough.
Posted by Peter Greene at Friday, December 18, 2020