I Have One Good New Years Story

New Year's Eve is not one of my favorite holidays, and some of them have been downright unpleasant, but I have one good story. It involves the Olympic torch.

Back on New Year's Day of 2002, the Olympic flame was on its way to Salt Lake City, and on its long circuitous route out West, the flame passed through Erie, Pennsylvania, which is just up the road from me. On New Years Eve I packed it in early and was in the car early the next day to take my turn at carrying the torch.

My leg didn't come until a little after noon, but torchbearers had an early call for training. We had received much of our info in packets well ahead of time, along with our official torchbearing outfits, which were comfy and warm and remarkably free of any commercial elements (and one of our requirements was to keep them that way). I did in fact have a corporate sponsor (Coke and Chevrolet split the torch run; I was a Coke guy).

The operation was run by twenty-somethings who had taken time off from work to run this cross-country operation; our host was a guy named Steve who had left a job he'd been at for four years and was going back to school when he finished with the Olympics. He was being paid in a free tour of the country, and he seemed pretty happy about it.

The actual business of torching was a well-oiled machine. Those of us on a particular leg were loaded  on a bus which traveled at the front of a procession. We were dropped off at our spot. A handler popped a little gas capsule into the top of the torch. Then we waited. The runner zipped up, we passed the flame to the new torch, and then I took off. The actual leg was about a quarter mile, which doesn't seem like much (and I was in running shape back then) but running with one arm holding up a torch is a little tricky. The torch itself was made of relatively light-weight aluminum, but still holding it up for a quarter mile of running is a challenge.

A runner runs with you, just to make sure (the pre-run info packet includes instructions that you my not alter the route). There's a photography truck in front of you, camera guys hanging off the back (you can buy a professional picture of yourself making the run) and there are other vehicles behind you, but you and the crowd still have a clear view of each other. My ex-wife and her husband brought our kids to watch, and some other friends were there. I ran in a residential area and the crowd was not spectacular, but the whole scene was still amazing. At one point a woman in the small crowd hollered, "What's your name," and it took me a second to figure out how to respond.

Before you know it, you're coming up on the next runner. You light their torch, then you climb onto the bus that has been traveling behind you, collecting up the runners to take them back to the staging area. There were twenty or so of us on the out-of-Erie leg, including a local anchorperson, a retired school teacher who had lost part of her leg when hit by a car, a hockey coach who dedicated her run to two teen team members who had died in the last year, a college sophomore who had won Olympic medals in swimming, and a guy who was on his way to complete marathons on all seven continents by running one in Antarctica. From my region there was just one other guy-- Cootie Harris, a local legend in both jazz and martial arts, who would have been 78 at the time. 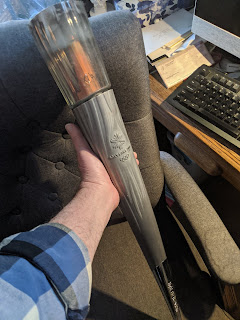 I was running for regular classroom teachers; I was there because a student had nominated me for the experience. He and some other students were also there to watch and shoot video. From the moment I got to Erie in the early AM, folks asked to get a picture withe me in my get-up. Some would ask who I was or what I did; I was probably the least famous runner there, but I could still answer, with pride, "I'm a teacher." The whole day was pretty humbling, but I was proud to be there for my students, my community, and everyday classroom teachers. I still have my torch (Coke bought all of their runners their torches to keep). Over the years my students would occasionally ask, "Did you really...?" and I'd take it to school to show them, to remind them that there is often more to your teachers than meets the eye.

It's a powerful symbol, passing the flame. It's not a thing, but a process, an elemental symbol for spirit that can be passed and spread and grown. It can't be captured and frozen in place. It has to move and breathe. It has to be fed. It was a good reminder of the power and energy of education, the importance of the work of teaching. It was a good day to spend New Year's Day, a nice refresher before going back to the classroom after vacation. After all these years, it's still the only good New Years story I have. Have a great 2020, and whatever your flame is, keep it burning.


Posted by Peter Greene at Wednesday, January 01, 2020
Email ThisBlogThis!Share to TwitterShare to FacebookShare to Pinterest