Donald Trump yesterday took the very Trumpian action of solving a problem that didn't actually exist until he made it up, in this case involving religion and education (two things in which he appears to have no actual interest). But hurray-- after today, students and teachers are free to pray in schools, which they were also free to do yesterday and last week and last year, etc etc etc. That's why accounts have said it "updates" or "reinforces" the rules-- because it doesn't actually change a thing. There is one new wrinkle in today's decree-- school's now have to provide a means of officially complaining if someone thinks their right to pray has been stomped on.

Well, there is one other wrinkle. Betsy DeVos has steadfastly refused to provide an example of misbehavior by a school or state that would prompt her to flex federal muscles to say, "Knock it off--now!" Not discrimination or abuse of students' civil rights. But now, here, finally, we've got one. If DeVos thinks you're interfering with someone's exercise of religion, then she's ready to extend that federal reach and lower that federal boom, apparently. So yesterday was kind of a milestone in that respect. 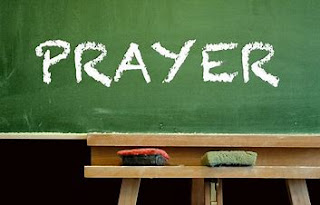 This will have next-to-zero effect on my neck of the woods. A neighboring school district was the subject of a lawsuit from an atheist student years ago aimed at keeping them from having a school official offer a Christian prayer at graduation. They folded, of course, and even that close encounter has had little effect on how schools do business in my neck of the woods. We never stopped having a Christmas concert. My former superintendent would open sixth grade graduation ceremonies with a Jesus prayer. At graduation ceremonies, most schools did turn to having a student offer prayer, with some folks thinking they were cleverly pulling a fast one rather than simply following the rules. When it comes to school prayer, folks really have trouble understanding that praying in school is, and always has been, totally okay, but having an official prayer and therefor giving an official government endorsement of a particular religion is not okay.

Christianity is huge in this county, in one form or another, so we have had regular demonstrations of why the rules are important. If you think a superintendent's personal Jesus prayer at an official school event is cringy, imagine an elementary teacher trying to "straighten out" the only Jewish student in the room.

Yesterday's event included tales of folks suffering discipline and job loss for their praying, and I have no doubt that there are places where the wall is enforced a little aggressively. But I have my doubts that it is because of some far-leftie suffering "a growing totalitarian impulse." I'm betting that these incidents are more likely motivated by one of the most powerful forces in schools across the country-- fear of an annoying phone call. The phone call might be an angry parent or somebody from the state, but many administrators base an awful lot of policy on "What is most likely to cause my phone not to ring?" This, unsurprisingly, does not always lead to the very best decisions being made.

Not that this administration is interested in explanations that are so mundane, because this is yet another move designed to tap the deep vein of evangelical paranoia. The ongoing fiction of a war on Christmas and Trump's heroic work to get Americans to say "Merry Christmas" again was an early salvo in the battle to win evangelical support by solving problems that don't actually exist. This is more of that, and we'll certainly get more of it because it absolutely works, just as surely as it worked to say that Obama is coming to take your guns. Already we've got bullshit quotes like Dr. Robert Jeffress telling Fox News that this is "the beginning of the end of the war on faith." Spoiler alert: The actual end will never come because A) that imaginary war hasn't started yet and B) guys like Jeffress are never going to say, "The war's over and we won, so you can stop sending me money and elevating me to a position of political power." It would be silly if it weren't so insulting to people of faith who live in countries where, because of their faith, their lives are actually threatened, not just filled with the inconvenience of having to consider other humans and share power with those you don't approve of.

I've been in the church most of my life, and there have always been people claiming this stuff. The end of official school prayer in 1962 has been blamed for every child-related problem that ever happened since. Of course, 1962 was the year Marilyn Monroe died, the Beatles scored their first hit, and Wal-Mart opened its first store-- any one of those could also be blamed for the decline of civilization since.

And yet, students and teachers have always been free to pray-- just not with the official backing of the school. And of course, Christians have always been free to act like Christians, to treat their fellow students and colleagues with the sort of love and Christlike behavior that some actual Christians manage to display on a daily basis no matter where they are. But somehow, these days, that's not enough. My own denomination is currently in the process of splitting itself apart because some folks feel that they can't really exercise their faith unless they get to deprive LGBTQ members of the chance to become ministers or get married, which would seem to be a freedom of religion problem if you are an LGBTQ human who feels called by God to ministry or who feels a need to solemnize your union with your partner before God and humans alike. It's the all-too-common conflict between those who feel living out their faith means acting a certain way and those who feel that they are only getting to express their faith if they can keep other people from acting a certain way (or, in extreme cases, punish them for it). Personally, I think only one of these views of faith is supported by scripture.

And of course the whole religious freedom conversation only ever seems to be about Christians. Betsy DeVos (or some staffer) made sure to include a line about Ramadan, but that's not what this is about. Other religions aren't on the radar for these folks who are certain that this is a Christian nation, all other shut up.

But it will be. That business about being able to turn your school in to feds because you feel your religious freedom has been stomped on? You can start counting down right now to the moment that a bunch of sophomores form a Satanist worship club specifically so that they can get shut down by the school and then sic the feds on their administration.

Look, this is one of the quintessential American issues. The Pilgrims didn't come here to escape theocracy and establish religious freedom; they came here to establish a theocracy where they could be on the top instead of the bottom. But the founders were smart enough to see that when you mix religion and politics, you get politics, and everybody--including the church folk-- loses.

This little sideshow will not change much about the way most schools operate, which is determined as much by local custom as anything else. Religion has no place in public school, even more so than in national politics, because every student who walks in the door should feel safe and welcome. But then, another way of stating the DeVos doctrine of "students should be free to find the right fit" is to say "students should be able to go where they are welcome," which is just another way to see "schools should be free to only welcome the students that they want to welcome."

In the meantime, be far more concerned about things like Project Blitz, which hopes to bring repressive theocracy on a state-by-state basis.

This was just for show and to shore up the base. The real event comes later, when the Supreme Court hears Espinoza v. Montana, a case that could break the wall between church and state. That's what DeVos is hoping for. We'll see how it goes.


Posted by Peter Greene at Saturday, January 18, 2020
Email ThisBlogThis!Share to TwitterShare to FacebookShare to Pinterest