Betsy DeVos went on Fox and Friends this week, the softest of soft interview destinations form members of this administration. If you want a quick six-minute sampler of her current talking points, you could do worse, but it you don't think you can take looking at the patented smile d'smarm, here are the highlights- and there are a couple of revealing moments here.

The segment is nominally titled "Combating the Homeless Crisis In Schools," and it starts with some b roll of homeless folks while noting that over 114,000 students in NYC were homeless last school year, which works out to about one in ten. "So what can be done to make sure disadvantaged kids have access to top quality education?" 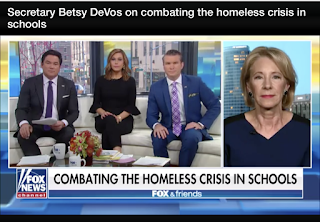 Well, from "homeless" to "disadvantaged" is a bit of a leap, but it really doesn't matter, because we're never going to talk ab out this issue for the rest of the segment. It's time to introduce DeVos, whose smile is having even more trouble than usual making it all the way up to her eyes. After the intro, we re-present the question as "what more can be done to make sure that everyone gets access to quality educations" (yes, that's how he said it). The homeless have now vanished from the conversation.

DeVos opens by invoking NAEP and citing made-up statistics. Two out of three eighth graders "can't read or do math at the level they should be able to" which is a meaningless statement-- "should be" according to whom-- but shows her backing away from her earlier assertion that these students couldn't read at grade level, which is simply a misstatement of what "proficient" means on NAEP. But she's still talking baloney here.

"And so," she says, as if this next part follows logically, President Trump and this administration is focused on creating more pathways and freedom "for students and their families to find the right fit." She points out that kids learn differently and need different things, so more choices. (At no point in her answer does she make any attempt to connect this to homeless students, who need things like, say, a home.)

Now the left-hand host puckers up and observes that DeVos, being rich as shit, didn't have to take a government job, but gosh, she's always been so passionate about "finding ways to educate the disadvantaged in the United States." He points out she's always been dedicated to charter schools, school choice, vouchers, and so, he asks, are these some of the solutions to that problem. And I want to point out again that we've just sort of lumped homelessness and other "disadvantages" together, like there isn't a wide range of specific social issues with specific causes and effects. Just, you know, all them poor kids. But anyway-- are here favorite policy ideas the answer?

Freedom! Education freedom, and a whole range of choices. It doesn't even have to be a school building-- I guess those homeless kids could just cyberschool on their computers. Empowering families (but not, mind you, empowering them with food and shelter, because empowering is not the same as coddling) is a focus on this administration and probably the biggest fiction out of her mouth is the repeated insistence that Donald Trump really cares about this education stuff. But this is all so she can pivot back to her Education Freedom Tax Dodge Scholarship program, a program that is already DOA in the current budget, but I guess even for wealthy cabinet secretaries, well, the heart wants what the heart wants. Her program would give rocket fuel to current efforts in the states.

Now, Fox lady is going to ask about the Democrats and how the candidates have abandoned school choice (and if you were expecting some grasp of the differences between, say, charter and voucher policies, I'll just remind you which show we're watching). And we get some clips. Sanders saying that too many charter schools do a lousy job. Joe Biden (at the Pittsburgh ed town hall) saying that he'll throw out all DeVos's stuff, which is a curious choice given some of that stuff is leftover Obama/Biden stuff, and Mayor Pete making his meaningless pledge to wipe out for-profit charter schools. Then they bring up Cory Booker "who used to work alongside you" and then abandoned his pro-charter position "especially during your confirmation hearing." Then she asks "why would he do that," effectively canceling out all the previous stated and implied questions.

Ah, but you already know the true villain here. "The Democratic candidates are beholden to the teachers union." And she pivots off that question "But the fact is" there are a million families on wait lists, which may come as a shock to the charters around the country that are closing because of low enrollment. That one million number comes from the National Alliance for Public [sic] Charter Schools, and you know their estimate has to be accurate. We need more of these schools, because they are providing the kind of "direction" and "opportunity" that students need. No word about providing education. "Results prove out and the demand is there," she says. Which results?
Prove what? Those are just some of the hard-hitting follow-up questions these repotrers have no intention of asking.

Righthand guy apparently checks his phone to get the quote from Congresswoman Fredrica Wilson who accused DeVos of being out to destroy public education-- he actually corrects himself to say "government run schools" instead of public. You may recall that Wilson hurt the seceretary's feelings with this accusation, and DeVos now takes this opportunity to, well, not rebut the Congresswoman at all.

The reality is that I care deeply about every single child, no matter where they are, no matter where they attend school, and this President and this administration cares deeply about the future and the opportunity that every child has to become everything that they can be. That's why we are not satisfied, we will not rest until we make the kinds of changes and reduce the kinds of empowerment and opportunities that all families need, that currently the wealthy, the powerful and the well-connected have, but those who don't have those means are stuck in too many cases in schools and situations that simply are not working for them, and we're not going to stand for that.

DeVos looks a little pissed as she delivers this non-answer, which could easily mean, "Yes, I intend to destroy public education and I have my reasons." Yes, I think she bobbled a word in the middle, but this is pretty vintage DeVos, particularly in the context because, hey, remember when this interview was about homeless students. I bet they find themselves in a situation that isn't really working for them, and I bet the solution is not to hand them a school voucher.

But now for a change of pace. Righthand guy says he still hears a lot about Common Core, and gee that math homework is hard, and what are you guys doing about it?

"Well, just as President Trump campaigned on to end Common Core, Common Core has been ended."

Nope. I'm as quick as anyone to say that the Core has failed, but ended? Nope. But DeVos is goin g to take (and share with Trump) credit for removing the Core from federal law. She's also, in Trumpian fashion, going to take credit for passing ESSA (December 2015). Getting rid of federal laws about Common Core is on par with the feds taking credit for ending polar bear attacks in Palm Springs. She's going to shoehorn a plug for CTE in here as well.

They thank her, she thanks them, and we're back to the panel on the couch. Rightbhand guy says he comes from a state that still has Common Core, and righthand guy says he has trouble doing math homework (center lady just has trouble doing math at all--ha-ha funny ladies and their weak thinky parts). Then righthand guy goes off about "experiential reading" and "there's no phonics" and dang--we ran out of time before we could get back to those homeless students.
Posted by Peter Greene at Wednesday, January 15, 2020
Email ThisBlogThis!Share to TwitterShare to FacebookShare to Pinterest