How Tech Killed Tractors, And Why Teachers Should Care

If you don't spend a lot of time around farms and farmers, you might have missed this story, which just made its way into legit journalistic coverage via the Star Tribune of Minnesota-- there is an exploding market for forty-year-old tractors.

Adam Belz reports on auction bidding wars over old tractors. Is it because of tractor nostalgia? Nope-- and if you think about your car or music system or the device with which you're reading this post, you already know the answer. Those earlier tractors were well-built and have lots of hours in them, but tyere's one other factor:

The other big draw of the older tractors is their lack of complex technology. Farmers prefer to fix what they can on the spot, or take it to their mechanic and not have to spend tens of thousands of dollars.

“The newer machines, any time something breaks, you’ve got to have a computer to fix it,” Stock said. 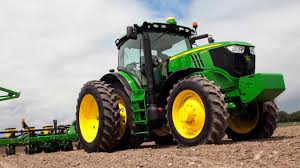 The tractors are loaded with shiny new tech. As Jason Bloomberg put it at Forbes, "John Deere is but one of thousands of enterprises undergoing digital transformation as it becomes a software company that runs its technology on tractors, rather than the other way around."

Farmers have steadily lost the right to repair, meaning that a tractor breakdown can result in a lomng wait for your turn to get a costly repair. It's not just the cost and the downtime that suck; as pointed out by Greg Peterson, the founder of Machinery Pete, "That goes against the pride of ownership, plus your lifetime of skills you’ve built up being able to fix things."

John Deere has become a major cutting edge pain in the butt on this topic:

In a particularly spectacular display of corporate delusion, John Deere—the world's largest agricultural machinery maker —told the Copyright Office that farmers don’t own their tractors. Because computer code snakes through the DNA of modern tractors, farmers receive “an implied license for the life of the vehicle to operate the vehicle.”

There's a whole Right To Repair movement in the agriculture world, but they are swimming upstream, and as quickly as it wins lawmaking victories, corporations like John Deere claw them back.

This is the tech world. Remember, you don't own the music on your ipod or the books in your kindle. Your Windows machine keeps reminding you that Windows is a "service," implicitly pointing out that you didn't buy a product you now own, but are simply licensing-- renting-- access to what they allow. Apple spends a ton of time in court arguing that no third parties should be allowed to horn in on their lucrative repair business.

The implications for ed tech are large and often overlooked. But when your school gos to a digital textbook, they don't buy copies-- they buy licenses. They subscribe to software. Those lucrative Big Standardized Tests (and their cousins, the Big Standardized Practice Tests) are licensed, not purchased. And God forbid that you should ever make an illegal copy of anything.

A few decades ago, I taught from an exceptionally good literature series from MacMillan. The company was purchased, the text was discontinued, we bought a new series-- all the usual stuff. But until the day I retired, I had an old weathered class set of those books in my cupboard (and my successor still does) that I could pull out at any time. Because those were tools that the school bought and subsequently owned.

As ed tech moves further into schools, schools actually own less and less of their own instructional materials. If all the ed tech companies were to go belly up tomorrow, some schools would suddenly find themselves without a large portion of their instructional tools.

And, of course, like farmers with a glitchy John Deere tractor, teachers who hit a snag with a piece of ed tech just have to wait till the company can send someone to fix it.

Tech takes control away from the people who actually do the work. Your building may have many people who know how to, say, load toner into the copier. And there are probably many people who could, if given access and permission, deal with some computer tech problems. If.

Tech makes many swell things possible, but it also extracts a price, from the car you can no longer fix yourself to the media that you can only have access to as long as you keep up payments. It would be wise for schools to give attention to the extra costs they pay for new ed tech products.


Posted by Peter Greene at Tuesday, January 07, 2020
Email ThisBlogThis!Share to TwitterShare to FacebookShare to Pinterest