Erie has come a long way since the days that visitors would travel to the beaches just to be appalled by the dead fish on shore, the days when Western Pennsylvanians called it "The Mistake on the Lake." The waterfront is now pristine and beautiful, the city now boasting great theaters, hotels and recreation. But public education is still struggling. 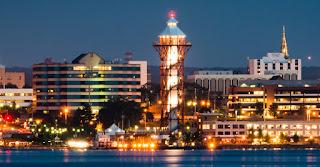 Just two and a half years ago, the previous superintendent of the district was asking his board to consider closing all of Erie's public high schools and just farming the students out to surrounding districts. The move may have been a play for attention, but it grew out of real problems.
Erie suffers severely from issues felt across Pennsylvania. The state is near the bottom of US states in its support for local districts (generally around 36% of school money comes from the state). That means that local districts must supply the bulk of district finances. The ability of local districts to come up with money varies wildly from place to place, which is why Pennsylvania has had the greatest gap between rich and poor districts in the nation. Governor Tom Wolf entered office announcing his intention to fix that, but so far progress has been minimal. In the meantime, Erie is not exactly a rich district, and it has gotten poorer as charter schools (both brick and cyber) have popped up in the area, moving more and more money away from the public schools.
Charter school advocates have long argued that competition will unlock excellence and general awesomeness. The plight of Erie's public schools gives us a hint about how that actually works.

Last month the Erie Times-News ran a piece by Ed Palatella looking at the possible fate of one Erie charter-- the Erie Rise Leadership Academy Charter School. The K-8 school of over 400 students has ranked consistently low in its test scores (last year found only 6.9% of the students scoring proficient or advanced on Pennsylvania's big standardized test). The Erie School District will hold hearings to decide whether or not to pull the plug; that plug-pulling almost certainly would come with court challenges and appeals, so the district has to weigh many factors.
The current superintendent, Brian Polito, is not hostile to charters, but he can't ignore the threat they pose. Last year Erie lost $23.5 million to charter schools, and in the face of financial and enrollment losses, it has closed or consolidated numerous schools. In Pennsylvania, a regular education student is worth around $10,000 to a district while a special education student is worth $20,000 (gaming that difference in funding by enrolling students with low-cost special needs can help a charter bring in a truckload of revenue).
This is the situation that's supposed to fuel competition. But how do Erie schools compete when they are already academically beating the socks off Erie Rise, even as they struggle to get by with limited funds?
That's the issue Polito is trying to address: reducing charter bleed for the district. Polito started in the job just over a year ago and he's been looking for the answers. The district has surveyed the charter families, and they'll use those responses for a campaign slated to start in 2019 that will include a variety of approaches right down to sending district employees to knock on doors.
The state has given Erie schools an extra $14 million in state funding to help rescue the district, and with that comes Charles Zogby, a state-appointed financial administrator to oversee district finances. Palatella reports Zogby's response to the plan unveiled at the December 1 board meeting:
“You must fight fire with something,” Zogby told the School Board of focusing on charter schools. “It is not as if any of the charters are blowing the doors out compared to any Erie School District School.”
The CEO of Erie Rise says they will run their own counter-program.
And so Erie is poised to see the same kind of competition that has broken out in other cities where charter schools are crowding the public system--a marketing competition. One may argue that having schools market more aggressively will result in schools that are more responsive to the families who are their "customers," and that may be true but there are several points worth remembering.
First, the marketing will be aimed only at the desirable students, and not the ones who are more difficult or expensive to educate. Second, taxpayers without children will find themselves shut out of the conversation about education in their city. Third, marketing costs money--money that could have been spent educating students. And perhaps importantly, just because a school markets itself well, it does not follow that it is a good school.
Lots of terrible products are well marketed, and lots of great products fail in the marketplace. This is Greene's Law: the free market does not foster superior quality; the free market fosters superior marketing.
Erie's public schools have been to the brink of destruction. Next year will be a test of whether or not competition can actually save public education or will simply drive it that much further from its original purpose.
Originally posted at Forbes
Posted by Peter Greene at Tuesday, January 08, 2019
Email ThisBlogThis!Share to TwitterShare to FacebookShare to Pinterest