In Praise of Inconsistency (TL;DR)

At my school, there was an academic question that would come up fairly regularly-- should all teachers use the same style guide for writing essays and papers?

The argument in favor of consistency is that it's easier on the students. Not only that, but with only one set of rules to learn, they might actually learn how to use it properly. It would also create a sense of unity across the classes and disciplines, making the whole institution seem like a unified whole. 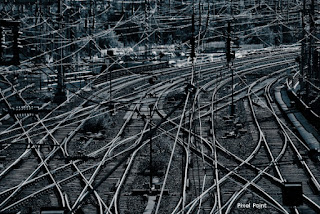 Lord knows it would make teaching easier in some respects (though I have a confession to make-- for the past several many years, I stopped doing any direction at all of MLA documentation, mostly because I could use the time for other things and no matter how cleverly I taught the stuff--and let me tell, you, I have some incredibly droll sample fake bibliographies-- my students just went ahead and made stuff up anyway-- so for the tail end of my career I just said, "Use MLA style. Look it up on the internet, and if you get it wrong, it will count against you"-- but I digress).

I was never on the side of consistent standards (surprise). I attended a liberal arts college and had to take courses in at least nine different disciplines. Writing is messy and as I always told my students, there's really only one rule: The format preferred by the person giving you your grade is the correct format. Nobody ever won an argument about a paper grade with her college professor by saying, "But my 11th grade English teacher said I should do it this way."

Now I can add another argument to my side. In my new life as stay at home dad and writing side hustler, I do writing and editing work for five different bosses, and no two of them want things exactly the same way. Nor am I about to write to all of them and demand that they adopt a common set of rules to make my life easier.

I have four children, three grandchildren, and a lifetime total of two wives. None of them have needed exactly the same things in the same way at the same time (not even the twins, who began as a single fertilized cell and are now two entirely different people). I have a large extended family, a bunch of in-laws, and bunch of ex-in-laws who are still my son and daughter's family, so they are still mine. I have had many hundreds of students, and I've lived in one small town for almost m entire life, so I know a bunch of people. Every single one has been different from every other one.

There's a Talking Heads song called "Heaven" and the lyrics include

When this party's over, it will start again. It will not be any different. It will be exactly the same.

When this kiss is over, it will start again. It will not be any different. It will be exactly the same.

Heaven is a place, a place where nothing, nothing ever happens.

It's a subtle smart challenge to our notion of perfection, which is imagined as perfect consistency, a static state in which nothing ever happens, because everything is exactly the same. Perfectly consistent. It sounds alien and awful.

We could turn back to the oft-quoted "Do I contradict myself? Very well, then. I contradict myself. (I am large. I contain multitudes.)" or "A foolish consistency is the hobgoblin of little minds." I'm partial to "Speak what you think today in hard words and tomorrow speak what tomorrow thinks in hard words again, though it contradict every thing you said today." They all represent just one side of the American conversation; we love mess, and we strive constantly to wipe it out, and I get that because I do the same in my own life. Perhaps this is one of those things where our lives are strings that only sound notes of depth and beauty when stretched taint between the two poles.

Of course, much of it is fear. For whatever reason, we believe that order and neatness and consistency protect us, while chaos and mess harbor all manner of dangerous beasts. We get that way in the classroom-- if there's too much disorder, too much chaos, then Something Very Bad will happen. That fear may not be ungrounded, but what is ungrounded is the belief that neat order will save us. It won't. Order gives birth to just as many monsters as chaos. Neither is safe.

The understanding that there is no safe place is both terrifying and liberating , because now we can start to deal with the real fear. Because "Something Very Bad will happen" is really short for "Something Very Bad will happen and I won't be able to handle it." The first half of that proposition is hard to affect, but the second part-- the second part is where our power lies.

The power reveals itself in odd places, like the warmth of nostalgia that grows in the same patch where fear and chaos grew up. I'm not talking deep stuff here. Elvis was a terrifying threat to civilization, but then he didn't destroy civilization and in the rear view mirror of nostalgia he was suddenly bathed in a warm friendly glow. Martin Luther King Jr was a terrible threat and a dangerous radical then, but now he's an exemplar of a Great American. Every President (so far) travels an arc from "Oh my God he's going to kill us all" to, years after he's left office, "He was an okay guy after all." When the worst doesn't happen, we get all warm and fuzzy about things we used to consider chaotic danger.

That is the other scary part of chaos and inconsistency-- they make it hard to know what's going to happen next. What's coming? Will we be able to handle it?

These are the questions our students ask, somehow, all the time. Our impulse is often to  cocoon them in a stable, ordered, static, controlled, neat environment. We try to send the message that nothing too terrible is going to happen to them here (though at times we really, really botch the job). That's not wrong-- they're children, they can use a little protection, and we need to pull on that end of the string to make the music. But we need to pull on the other string as well-- whatever is coming, you can handle it. You are strong. You are resilient. (Note: we do not send that message by approaching them in a place of "you have a grit deficit we need to fix"). We need to show our students their own toughness so they can believe that they are equal to the task.

So here's to chaos, disorder and messiness. And here's to the music we make when we are stretched tight. Here's to facing it and here's to rising up, stronger the next time because we saw how strong we could be the last time. Do we contradict ourselves? Tough. Deal with it. A million paths, a messy map, and the chaos road-- it's the only way to get to heaven.
Posted by Peter Greene at Friday, December 14, 2018