From the file of Things That Are Going To Affect Education Indirectly, we get this:

Roughly 276,000 more children were uninsured in 2017 than the year before, bringing the total to more than 3.9 million, according to a report released Thursday by Georgetown University's Center for Children and Families.

We are far short of the disastrous high in numbers of uninsured children back in 2008, but the trend since that fateful year has been one of steady improvement-- until last year. 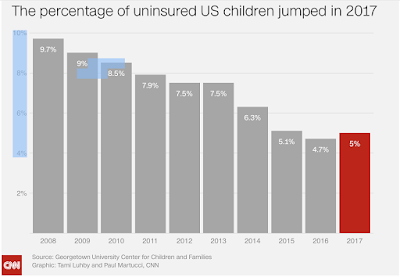 It's a problem for children to come to school sick. It's a problem for children to stay at home sick with an untreated illness, but even mild illness can be a problem if the state or school has strict sick day policies. If a doctor's note is required to get the child back in, an uninsured child's family faces one more tough choice-- can we afford a doctor's appointment just to get a note, do we send the child to school sick so that we don't need a note, or do we keep the sick child home, send her back without a note, and just watch the issues of unexcused or illegal absences just start to snowball?

The screwed-up mess that is health care in this country is certainly not something that schools will have a hand in fixing, but many other issues in society, schools live downhill from all the crap that society's problem generates. The Trump/GOP efforts to squash Obamacare seem likely to make this trend worse. Schools can only watch and hope.