There may be few Very Rich Guys who can top Elon Musk for confidence that is boundless and groundless, so it should come as no surprise that Musk started a school.

Unlike other wealthy meddlers in the education world (and, that matter, unklike Musk when it comes to other enterprises), Musk has kept the not-for-profit school, created in 2014, mostly under wraps. That's because his goal has not been so much to rebuild the world of school as it has been to buy a custom education for his own kids. 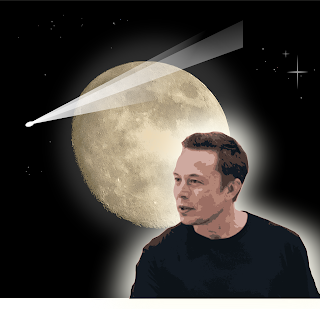 Musk has five-- one set of twins and one of triplets, so God bless him and his wife. For much of Ad Astra's existence, the Musk children were more than half of the student body. A few openings were made available for other students at the campus located at Musk's SpaceX headquarters, but basically we're talking the most expensive work-based homeschooling ever.

As one might expect, the studies are non-traditional both in terms of content and organization. Musk pulled his children out of one of Los Angeles's top gifted schools and hired away one of their teachers, Joshua Dahn, to run the school.

Now Corinne Purtill at Quartz has turned up the admissions questionnaire for the school. It's not traditional, either. Applicants should be between 8 and 13, with LA students strongly preferred. The only simple question on the form is to ask if one of the parents works for one of Musk's companies.

Parents have the option to share a student project that shows "commitment, ambition and originality," and then the student must handle one of three problem-solving questions.

In the first, called “Goldilocks,” prospective students are presented with descriptions of 11 fictional planets and asked to identify the best three choices and worst three choices for a new human colony.

In "Eleventh Painting” a lost work by a fictional famous (and dead) painter is discovered during construction in her home town in Mexico. When alive, the artist had stipulated that any sales of her work be used for children’s arts education. Applicants must rank five prospective buyers-- each offers vastly different amounts of money and public access to the work.

In “The Lake,” students are given a description of an environmental catastrophe at a local lake and asked to apportion the amount of blame among six parties involved: scientists, politicians, voters, the media, the polluter, and a shadowy figure known as the “puppetmaster,” who is described as “a wealthy individual who is afraid that new regulations could affect their business empire.”

Applications are due January 1, so if you haven't started working on yours, well, good luck with that. You'll also need good luck with Musk's attention span. Musk apparently funds the school almost single-handedly (to the tune of $450K in 2014 and 2015), and it remains to be seen if he will continue the project after his own kids have aged out.
Posted by Peter Greene at Sunday, December 30, 2018
Email ThisBlogThis!Share to TwitterShare to FacebookShare to Pinterest