The Most Pro-Privatization States

The Network for Public Education, a grass roots organization that advocates for public education in this country (and of which-- full disclosure-- I am a member) has just released a report that is both useful and painful. It's a state by state look at privatization, completed in partnership with the Schott Foundation, and the results are illuminating. I'm just going to hit the highlights here-- you can read the whole report yourself without feeling as if you've enrolled in grad school (it's all under thirty pages and it's in plain English).

The report worked up a score for each state based on its resistance to the trends in privatization of public education. The five categories that the researchers looked at:

Types and extent of privatization- Just how far has the disease progressed?

Civil rights protection- Because privatization tends to go hand in hand with attacks on civil rights of students, families and communities

Accountability, regulations and oversights- Is anyone actually keeping an eye on the results of privatization, or is your state the land of Do As You Please?

Transparency- Does privatization and the private schools it empower all operate within a dark box inside which nobody is allowed to peek?

Other factors (charter schools)- Some states have come up with their own special wrinkles in charter law as a tool for privatizing education.

After analyzing the information and crunching the numbers, researchers assigned a numerical score, then converted that to a letter grade. 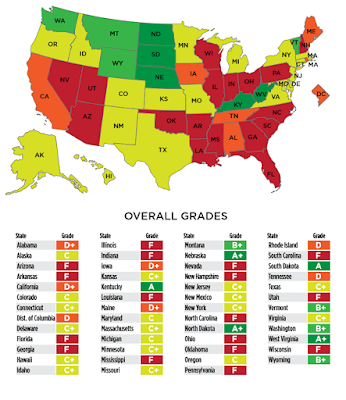 The highest ranking states for resisting privatization were:

It's not an entirely encouraging list-- the last few states only received a C+.

The worst states in the US for privatization?

The spread is pretty wide. Nebraska secured its first place finish with a score of 99.5, while Arizona is worst in the nation with a 31.25.

Some Other Alarming Findings

* 28 states do not require charter schools to hire teachers with the same certification required for public schools.

* 38 states and DC have no required transparency provisions for charter school use of funds.

* Only one state (Iowa) requires that English Language Learners must receive language instruction until they're fluent.

* 23 states do not specifically protect students against religious discrimination.

* 18 states do not mandate services for students with special needs.

* 12 states and DC allow students to receive vouchers even if they have never attended public school, the most extreme example of money leaving the public district even though expenses have been lowered $0.00.

There's a great amount of detail and specifics in this report, but taken together, it forms a larger picture of the major problem with privatizing education-- the system bends toward directing money away from students and towards the profiteers. Instead, the emphasis is on allowing privatizers ways to cut costs and maximize profit. And while this happens, the states build (or re-build) a two-tiered system, with quality education for those who can afford it and 'just barely good enough" education for everyone else.

The report offers some recommendations at the end, including a moratorium on charter expansion. But in about the only point on which reformsters might take heart, they do not call for closure of charters or cold-turkey cut off of voucher programs because that would create disruption and instability for students currently using those programs. Instead, phase vouchers out carefully, and rather than close charters, let them be absorbed into the public system.

Read the report. See how your state scored, and look at some of the specific policy choices that NPE/Schott have targeted. Then contact your elected representatives and show them this report. Tell them about the specific policies that are creating trouble for education in your state. And keep doing it.

Posted by Peter Greene at Friday, June 22, 2018
Email ThisBlogThis!Share to TwitterShare to FacebookShare to Pinterest