There's a scene in many vampire movies. Someone (usually not the hero) is holding a vampire at bay with a cross. The vampire locks eyes with him. "You don't need to do that. You are perfectly safe from me, and I know that cross is just starting to feel heavy. Heavier and heavier. Why don't you just put it down." And the camera closes in on our intrepid human-- will he put the cross down?

The Supreme Court decision in favor of the corporate sponsors of the Janus case came as a surprise to absolutely nobody. The implications of that decision have yet to be worked out. Of course, in the 28 right to work states, the implications are almost non-existent. In the other 22, wellll…… I'm not inclined to view this as a catastrophic death knell for unions. It sure doesn't help, and it's certainly part of a larger campaign to get rid of unions, but it could well be surprisingly good for some unions that had made themselves vulnerable to this sort of thing by letting leadership become entrenched and detached from members.

Supporters of the lawsuit call it a win for freedom of speech. But as with many freedoms, exercising freedom of speech is not free. If you're a billionaire, you get to exercise your speech via advocacy groups that you finance and research reports that you pay for and news stories that you plant or create and sectors that you commandeer via "philanthropy" and just the fact that powerful people will take your phone calls. If you're working stiff, you get to exercise your freedom of speech by writing letters that may or may not be read or making phone calls that may or may not be answered or, hey, you could always start a blog. Or you could join together with three million other working stiffs and collective enjoy the same kind of money and clout that one of the one percenters enjoy. It is, admittedly, a tough trade off, because three million people (or even a hundred local people) put together won't always (or even ever) agree on a message, and sometimes the leadership doesn't help very much, but on the other hand, trying to negotiate a contract for yourself, by yourself-- well, it's a tough choice, but I know what lots of folks on the other side of the table want you to pick.

Hence the e-mails that started flying roughly 6.3 seconds after the Janus decision was issued.

The U.S. Supreme Court just ruled that all government workers – teachers, state workers, local public employees, police, firefighters and more – now have a real choice when it comes to their unions. The case is Janus vs. AFSCME and, put simply, the court determined that no public employee can be fired for not paying money to a union.

Whether it’s disagreements about politics, concerns about a lack of local representation, problems with union spending, or something else – you now have the right to stop paying for activities you don’t support.

This followed by a link to your state's version of the MyPayMySay website, which gives you a chance to fill out a form which yields a pdf you can hand to your union to drop out. They will also store your information "in order to help public employees exercise their rights when it comes to union dues, fees and representation. It may be used to contact or follow up with you."

Some teachers received this email, with the smiling face of teacher Susie Stockphoto in her room, 10-nowhere. 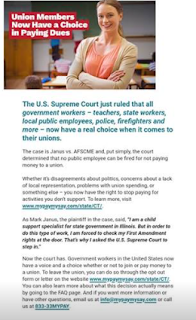 Regardless of your state, you got a paragraph or two of someone's personal "why I don't want to support the union" strory.

These emails are coming from the Mackinac Center for Public Policy, a group from Michigan that has been heavily involved in rolling back teacher rights, with ties to ALEC, the Koch Brothers and, of course, the DeVos family.

They are landing all over the country, mostly by way of teachers' professional emails. This is particularly ironic in states like Michigan, where Mackinac-backed legislation makes it against the rules for teachers to use school emails to discuss union business. In most states the professional email addresses are public information, so a simple FOIA request would have yielded them, though in many cases a bot or an unpaid intern could have scraped them from school websites where they are all publicly listed. On the other hand, such a request might be illegal under privacy laws in some states. One does wonder why some spam filters are not catching them.

This, of course, will not be the last of it. The Freedom Foundation (Koch Brothers, etc) has announced a plan to spend the summer going teacher door to teacher door to get people to leave the union.

And, wow-- it sure is inspiring to see the one percenters so deeply concerned about teacher freedom of speech. I mean, to devote all this time and money just because they want to make sure that every teacher has a chance to exercise her rights. It's inspiring. Just like all those other times they were out there in the schools making sure that teachers were free to express their opinions and stand up for students and advocate for better education without fear of losing their jobs and-- oh, no, wait. They DeVos's and Koch's were the ones agitating for the end of job protections so that teachers could be fired at any time, including for speaking up and exercising their First Amendment rights. In fact, the number of times that groups like Mackinac have been out there standing up for teachers' rights, First Amendment and otherwise, would be, by my rough count, zero. None.

It's almost as if this whole thing isn't about teachers' First Amendment right at all.

Which takes us back the vampire. He isn't gently crooning things like "That cross must be so heavy. Don't you want to just put it down?" because he's so concerned with the man's weary arms. In most of the versions of this scene, what happens next is this-- the man puts the cross down, giving up his last bit of protection. The vampire leaps forward, rips open the mans throat, drinks his blood, and leaves the victim dead and the vampire refreshed.

The cross may be ugly, prickly, imperfect, even a distressing mess. But at that moment, it's all the guy has got. Teachers, no matter what mess your local union is in, this is not the time to listen to the vampire's gentle plea.

[Updates: First, I can confirm that the emails are hitting Pennsylvania, too, as confirmed by one in my wife's school email spam box that arrived yesterday.

Second, My Pay My Say has its very own Facebook page, so if you wanted to share some thoughts with them about their campaign, that would be a place to do it.]
Posted by Peter Greene at Saturday, June 30, 2018