By the end of the day, I will not have a classroom.

I have one more duty to complete (I'm basically the stage manager of graduation on Sunday), but today is the last regular school day of my career. I'll scrub my classroom of every last trace of me, then hand over the keys and go home. 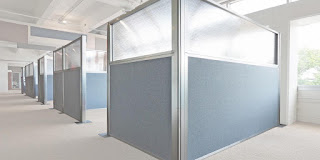 Of all the retirement moments that I've had to wrap my head around, this is turning out to be one of the tougher ones. Because I'll no longer a classroom, a teacher space of my own.

We probably should talk about space more often in education, because if there's one thing nobody in a school has, it's personal space. Teachers talk about closing the door and doing their jobs, as if that would somehow create a private space, but when a teacher closes the door, she's shut herself in the room with a whole batch of students.

Personal space, often defined by walls or even partitions, is a major status marker in most workplaces. It just doesn't come up often in education because almost nobody has any. Administrators get offices. Guidance counselors and other staff that require privacy for the students they work with get offices. Teachers get a desk. In a classroom, that they share with students. When teachers are forced to carry their stuff from room to room on a cart, that marks them clearly as the bottom of the food chain.

I've often argued, only half-jokingly, that districts could get away with lower pay for teachers if they gave each teacher an office-- even a cubicle-defined space.

Our lack of private and personal space is partly about being accessible to our students. Teachers aren't supposed to be able to say to students, literally or figuratively, "Go away. I'm not available to talk to you right now."

But it's also one more not-very-subtle way that teachers are de-adulated, treated like children, and put in a less-than power position in schools. It's one more signal-- "You are not in control and you don't have the real power here." Teachers try to fight back by bringing in objects, putting up decorations, even window treatments, to mark our territory as our own. But the smartest teacher knows better than to put something she really values in her classroom where it's vulnerable to any errant student or to any of the many, many people who have ready access to the room. Our district once employed a principal who, after teachers had left for the day, enter their rooms and check through the contents of their desks. She wasn't trying to catch anybody misbehaving-- she just wanted them to remember that there was not one inch of space in the room that they could call their own. In some districts, teachers will not be able to work in their rooms over the summer because they won't be allowed to keep their keys-- another way that districts hammer home that teachers are just guests in the building, but the space is not theirs.

And yet we get attached to the little space we're given, enough that I actually feel a pang that I will no longer have a designated personal space in this building. Time to move "create a home office" up the retirement to-do list.
Posted by Peter Greene at Friday, June 01, 2018
Email ThisBlogThis!Share to TwitterShare to FacebookShare to Pinterest