Fox Nails The Problem: These Aren't Our Kids

On Friday, Fox and Friends host Brian Kilmeade was talking about the immigration clusterfahrfegnugen when he hit upon an important insight:


These aren't our kids.

These aren't our kids.

Of course, in this case, we're drawing a circle around all US children and saying only those within the circle matter.

But understanding this aspect of tribalism explains a huge number of our problems in education.

It's not a new problem. Segregated schools were all about white folks saying, "I don't want to spend my tax dollars on schools for these black kids, because these are not our kids." They don't belong to our group, our tribe, our family. If they want money for decent schools, then let them get that money from their own people.

These aren't our kids. We have to take care of our own. I've got mine, Jack.

Some supporters of vouchers and charters and choice see these as a way to extricate their own children from schools that are filled with Other People's Children. 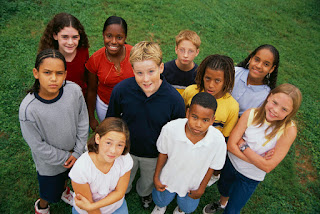 Some supporters of choice (and magnet) schools think they aren't involved in such tribalism because they believe in a mechanism for lifting Worthy Strivers out of those more lowly circumstances, but all they're really saying is that it's possible that some of our children got mixed in with Those People's children. Given the chance, some can prove they belong in our tribe. But this approach hasn't really changed anything-- it still ascribes to the belief that some children are inside the circle and some are outside the circle, and the one's outside the circle aren't our problem. These aren't our kids. Nor is there anything admirable about schools where the approach is "These are not our kids, but we'll try to make them almost as good as our kids, in some ways."

What some people find stunningly wrong about the Kilmeade quote is the notion that some children don't matter, because some people draw their circle around the whole human race. We've been light on rabid nationalism for quite a while, so it's jarring to hear the administration's policy of "We're America, Bitch" and the idea that other people are just worth less because they weren't born here. (This is one more reason that the embrace of Trumpism by some people of faith reveals a terrible hollowness in their religion).

We get into the occasional argument about whether or not education is a common good, but to a tribalist, there is no such thing as a common good, because that would involve people outside your own circle. A common good would be shared with the children of Those People, but these are not our kids.

There is only one question that need be asked of a school board member who has decided to direct shabby funding and minimal resources toward a particular neighborhood's schools, or a charter school operator who instructs children to stay in line and quietly comply, or policy-launching politicians or rich self-appointed overseers of education, and that question is this--

When politicians force Common Core and related testing into schools but send their own children to schools that have neither; when charter operators don't send their own children to their own schools; when local politicians strip resources from schools their own children will never, ever attend; when they strip local control from the families of the students who will attend these schools; when they let fly-by-night scam artists run rampant and put children's futures at stake in edu-flavored businesses that their own children will never suffer through-- they are not simply revealing hypocrisy. They are revealing that the affected children and families are outside the circle they have drawn. They are looking at the policies they propose and the children these policies will affect and they are saying to each other--

It's okay to do this.

Because these aren't our kids.

I don't know how you fix this. As Kayla Chadwick wrote a full year ago, I don't know how to explain to you that you should care about other people. The fundamental affliction here is a small, cramped definition of your own tribe, your own people. Yes, we don't have access to infinite resources to address every problem. But if you don't have enough food to give each one of your children a full meal, the best, most moral solution is not to pick a couple of children to disown and allow to starve.

Certainly we've gotten tons of religious direction on this. The New Testament is loaded with instructions to treat everyone as if they were part of your tribe. And yet, here we are.

It seems like a small, obvious thing to ask that policy makers (both elected and unelected), bureaucrats and politicians simply approach every decision, every idea from a standpoint of, "Would I want this for my own child?"

But time after time we have failed that test, and we always fail it the same way- but using some sort of tribal assertion, some sort of metal gymnastics, that allow us to say, "Well, I wouldn't want this for my kids--

"But these aren't our kids."