Recently Education Secretary Betsy DeVos met with the cadre of Teachers of the Year. Most of what came out of the meeting was predictable, but a special insight award goes to the TOTY from my own state:

“One of the things that was so stark and memorable in that exchange was. … Secretary DeVos trying to redefine what the word ‘public’ is,” said Michael Soskil Sr., Pennsylvania’s teacher of the year. “It was almost like Orwellian doublespeak to me.” 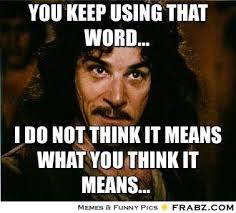 The charter sector has been trying to redefine "public" for years. Identifying charters as public schools solves a variety of marketing problems by giving the impression that charters include features that people expect from their public school. "Oh, a public school," the customers say. "That must mean that the school will be open forever (certainly all of this year), it is staffed with qualified professionals, and is required to meet any special needs that my child might have. Oh, and as a public school, I'm sure it must be accountable to the public as well."

Of course, none of these things are true, but the use of the word "public" is a buffer against having the questions even come up. I mean, who even thinks to ask a public school to guarantee that it will stay open all year?

But DeVos would like to twist the meaning of "public" even further.

DeVos envision an education system that includes charter and private and voucher schools, with perhaps a few public schools thrown in so we have a place to put the children of Those People, the ones that the charters and private schools don't want. Her idea of public accessibility is that any member of the public can have the chance to be accepted or rejected by the school. Her idea of public accountability is that "customers" are free to choose (though the ultimate choice rests with the charter and voucher schools). By this reasoning, all businesses are public-- except that we know that's not true.

What does "public" mean in the DeVosian world? Certainly not "controlled, owned, accountable to, regulated by, and open to all of the public." Again, the public has no role except to pay. Or possibly, if they have the power and connections, members of the public are free to try to score a piece of the unprotected tax dollar pie.

Edupreneurs have long complained about the "government monopoly," about the restrictions that keep them from being able to score some of that sweet government money. Maybe that's the key to the DeVosian idea of "public"-- "public" schools are schools that give entrepreneurs and businesses the chance to funnel a bunch of public tax dollars into their private bank account."

That definition would fit the current administration, where the President and cabinet members operate their offices for their private benefit and are accountable to nobody. In their universe, "public" means "not walled off by a bunch of regulations that keep tax dollars away from enterprising businessmen." Or to shorten it, "public" means "able to be privatized."

It's not quite an Orwellian reversal. "Private" means "it's mine and you can't take any of it" and "public" means "I'm able to take a piece of it for myself." Which means we have no word left for describing something that is part of the commons, held and protected transparently by representative government for the good of all citizens. It would be nice to have a word for that, but in the world our leaders have in mind, we may not need aby such word.


Posted by Peter Greene at Wednesday, May 02, 2018
Email ThisBlogThis!Share to TwitterShare to FacebookShare to Pinterest