Pennsylvania has been a big, fat profitable garden of cyber schools, taking an early lead over even California in letting virtual education take root. And there are so many aspects of cyber-schooling in Pennsylvania that we could discuss. As always, I'll preface this by saying that there are students fro whom cyber-schooling is a useful option. But the modern cyber charter industry is not aimed at them. It is aimed at money-- as much money as they could cram into a crowded clown car. When we talk about cybers in PA, there is so uch to discuss.

We could talk about how some are linked through not-entirely-admirable means to Pearson, the great money-grabbing educorporation. 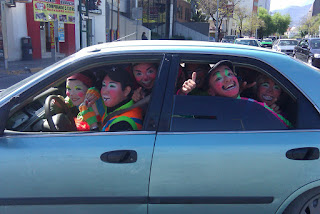 We could talk about the astonishing amount of profit generated by cybers like K12, the school founded by an ex-Goldman Sachs exec. Or that chain's rather loose association with ethical behavior and telling the truth.

We could talk about massive cyber-school fraud, like the case of Nicholas Trombetta of Pennsylvania Cyber School, who was convicted of siphoning off $8 million of the tax dollars funneled to him from PA taxpayers.

And while we're talking about Trombetta, we could also talk about the fact that Pennsylvania laws are so lax that Trombetta was finally brought down by federal authorities. The Commonwealth of PA would have let him go on indefinitely. That's probably one reason why PA State Auditor General Eugene A. DePasquale has called Pennsylvania's charter laws the worst in the nation. And yet, our legislature has consistently tried to make life even easier for charters and cyber-charters.

We could talk about the huge amount of charter lobbying money being spent in Harrisburg.In fact, K12 and Connections have spent more money on Harrisburg than on any other state in the union. That might fit in with the same discussion involving PA being the most cyber-friendly state in the union.

We could even talk about the problems of cyber schools accounting (or not) for students and the rare but horrifying issues that emerge from that gap.

We could even get out into rural areas like mine where folks can tell you (not that you'll ever read much actual coverage of this) about how an insane but hugely profitable cyber-charter reimbursement formula is gutting public school budgets.If you imagine that cyber schools are a money-saver for taxpayers because, obviously, their costs are far less than bricks-and-mortar schools-- well, think again. Cybers are reimbursed at a hefty rate based on the price-per-pupil of any other school. Ka-ching.

And if you want to believe that Big Standardized Test results mean anything (in PA, instead of the PARCC and SBA, we have PSSA and Keystone exams), then we could talk about this chart: 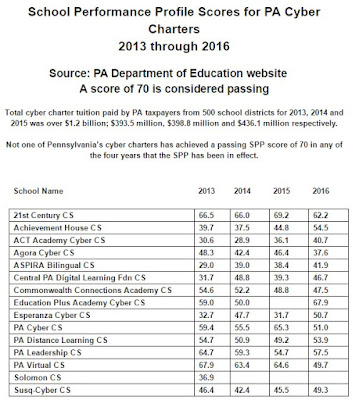 That's right-- not a single Pennsylvania cyber charter has ever achieved a "passing" grade. Not one.

And yet, somehow, they persist. The newest version of the charter sort-of kinda reform bill lets cybers sail on unhampered by things like rules and oversight.

And now, courts have sided with one more cyber-operator who wants to join Pennsylvania's virtual clown car. Well, sort of one more school, which is kind of the point. Insight PA Cyber Charter School has been battling its way forward over the last four years. The state department of education and the charter review board have both determined that Insight would basically be a sock puppet for K12, and so they rejected the application. In the process, Insight accused the state of engaging in an "effective moratorium" since 2012, which I think they mean to suggest is a bad thing-- but we've got fourteen cyber charter schools operating in the state, and they all stink. So a moratorium seems like a pretty mild response when the most appropriate response is to shut them all down.

Insight/K12 are proposing the oldest trick in the charter book. Insight will be non-profit, but it will buy its supplies, services, etc, from the very for-profit K12. It will, in effect, serve as a K12 money funnel.

The state's allegation was that, among other things, the relationship between Insight and K12 (which took in almost $1 billion-with-a-B dollars in 2014) would be so close that taxpayer dollars would be buying supplies and services from only K12, whether there were better, more competitive bids out there or not. Insight's counter-argument was that the state department of ed had been mean when they rejected previous application.

But when you're collecting a billion-with-a-b dollars a year, you can afford to keep throwing things against the wall until something sticks. What stuck was a lawsuit, and the wall was the Commonwealth Court, which decided "There is no evidence in the record of this case that Insight’s board lacks independence from K12."

The case could be bumped up to the state supreme court, where some sort of rational decision might be made. Because there's no evidence that Insight's plan would be a terrible idea except for K12's entire shabby history and the well-documented failure of their business.  Or-- and here's a crazy thought-- state legislators could start listening to something other than the sound of corporate money raining on the capital, and do the right thing, which is, at a minimum, slapping a strong leash on the education-flavored scam that is the cyber school industry.

Posted by Peter Greene at Friday, May 19, 2017
Email ThisBlogThis!Share to TwitterShare to FacebookShare to Pinterest