Charters and the Front Line

Here's one of the things that really bugs me about the charter school industry.

Public schools are on the front lines of multiple battles, and have been for decades, or possibly forever. Public schools work against ignorance and disinterest. They struggle with the issues of disintegrating families and families that appear whole but are dysfunctional. Public schools struggle against the parts of their local culture that don't support education (Who needs all that book learnin' anyway). 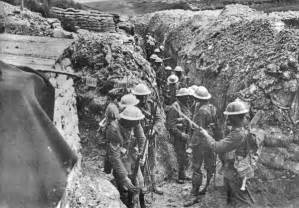 And while supporters of public ed are often accused to claiming that public schools are perfect and peachy, we are largely aware that they are no such thing. Institutional inertia, consistent underfunding, bad management, steady resistance from the very people who are supposed to be allies and leaders-- all of these create a myriad of problems in the public system.

Calling it a war zone is an overstatement, but it's my metaphor of the day. Public schools are France in 1916, a struggling, difficult battle that seems almost surreal in its endless confusion and waste.

But if public schools are fighting on the front lines of 1916, then charter schools are comfy barracks set up in Canada, far away from the front.

Now, I totally why parents would want their children stationed in Canada, safe and sound and securely distant from the fighting in Europe. I understand why, as a parent, one would want to see one's child as far away as possible from the worst struggling, the biggest dangers, the worst privations. I don't fault the parents who are able to choose Canada and do so.

Why I do object to is the charter schools, sitting Canada with barracks full of select troops, far away from the fighting, making announcements along the lines of "We have discovered how to end conflict" or "Hooray! We have managed to end the war!"

Neither of those things are true. The war is still grinding on-- you have just managed to move yourself, and some select individuals, away from the trouble. You haven't solved anything, don't know any secrets, have nothing to teach anyone about how to win the battle. You've just left other folks to fill the front lines (and on your way out, you've taken with you crucial supplies that the folks on the front line need). Just because you've dug yourself a comfortable hole and filled it with carefully-selected furnishings, that doesn't mean you're actually fighting in the trenches.
Posted by Peter Greene at Saturday, May 06, 2017