So here's a jolly exchange from Twitter on Saturday.

Get a different job. No one owes you anything.

That's Justin Hill, a Missouri GOP rep from the 108th district, showing his love and support for teachers in his state. He was a cop before running for office, so you'd think he'd know something about public service, but maybe not so much. 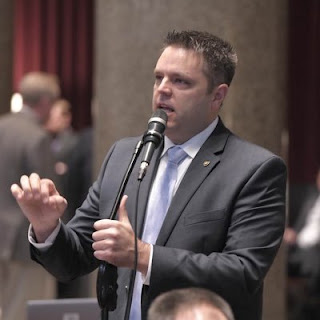 He's had a few ideas to offer before. While the Missouri legislature was working on some Covid relief, Hill decided to complain about feeding school students:

“Our school districts have become glorified lunch rooms,” said Rep. Justin Hill, R-St. Charles. “They’re not educating children, but they certainly are going to get money to hand out free food.”

The bill would give $75 million for the School Nutrition Services Program to reimburse schools for school food programs.

“This is an embarrassment,” Hill continued. “This is such an embarrassment; I am ashamed to even be having a vote for $75 million in food. When we have children sitting at home and their parents are at work, the children are playing, frickin’ Minecraft or whatever at home, and they’re not getting an education.”
Hill's not a fan of spending tax dollars. He also hung out with the Save Our Country Coalition, a hyper-right group formed by ALEC, FreedomWorks and Tea Party Patriots and headed by Art Laffer, famous wacky economist. Last fall, Hill joined that group in opposing federal spending to help prop up states.
Hill is himself an ALEC member (in 2018, he was their Legislator of the Year), and his runs for office have been backed by folks like Reed "School Boards Should Be Abolished" Hastings and the Missouri Club for Growth, plus David Craig Humphreys (a well-heeled MO businessman). And he's one of the reality-defying legislators still cheering on the January 67 challenge to Presidebnt-elect Biden's defeat of Beloved Leader, and is filing a resolution in the MO House calling on other states to investigate the imaginary fraud.
So as you might guess, that terse response to Ms. Piper (who is no stranger to some political wrassling) was not a one-off, and the conversation didn't get much better. Responding to another teacher, Hill argued that "everyone is struggling" and teachers shouldn't complain "especially while many are being paid while not working." Then this:

It's excellent advice, since many Missouri teachers make less than folks working in retail. The state has a mandated $25K starting salary, and many school districts barely beat that seriously low bar. The bar might be so low in part because it hasn't been raised in fifteen years; Missouri teachers leaving the profession (or the state) cite the lousy pay as a big reason. Missouri consistently ranks near the bottom of states for average pay, and is next-to-last (thanks, Oklahoma) in starting pay. And as you can see, legislators like Hill are really, deeply concerned about this issue.

Piper, for her part, responded to the t-shirt post with a cheery "You bet." You can order this shirt on Etsy right now: 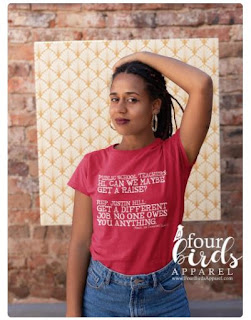