One of the linchpinny foundational keystones of education reform is a confusion between correlation and causation.

Sometimes correlations are random and freakishly mysterious. For examples, check out the collected and recollected Spurious Correlations, by which we learn, among other things, that the divorce rate in Maine correlates with the amount of margarine consumed.

But often the correlation-related confusion has to do with mistaking effect and effect for cause and effect.

Take the classic correlation month-by-month between death by drowning and amount of ice cream consumed. At first it seems sort of random, like the divorce and margarine correlation. But with a little inspection, we see that both the rate of deaths by drowning and ice cream consumption are effects of a separate cause-- the weather. In the snow and cold of winter, fewer people eat ice cream, and fewer people go swimming.

Someone might look at pro basketball players and conclude, "Hey, they almost all have huge shoe sizes. That must have something to do with making them successful NBA players!"

When we confuse effect and effect for cause and effect, we start trying to implement ideas. Some politician says, "Well, clearly ice cream causes drowning, so let's heavily regulate ice cream sales so that we can reduce the number of deaths by drowning."

Or a parent says, "Clearly, if I start my child wearing really big shoes from an early age, he will grow up to be an NBA player." 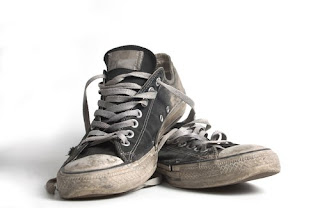 That's exactly where we are with education reform. Test scores are the big shoes of education.

We know that students coming from families with high socio-economic status generally do well on standardized tests.

We know that students coming from families with high socio-economic status generally do well in college and the whole career thing.

These are two effects. But the promise of ed reform is that if we can get every student to do well on a standardized test (PARCC, SBA, SAT, whatever Big Standardized Test your state has landed on), then the whole college and career thing will fall into place for them.

But putting my short, tiny twelve-year-old in size twelve shoes will not make him grow as big as an NBA player. In fact, forcing him into the shoes will probably create all sorts of other problems, including making it actually harder for my child to develop actual basketball-playing skills. Sure, there will be some outliers that can be used as 'success stories," particularly if the shoe companies discover they can make a mint pushing this plan. But mostly, it just doesn't work.

The promise of ed reform, stripped of all the fancy blather, is pretty simple-- if we can get these poor kids to score well on a narrow standardized math and reading test, they should find themselves with the same opportunities for a rich and rewarding life that they would have had if they'd been born wealthy.

That's a sad con, a big case of snake oil. Worse, it has caused a diversion of resources away from actually educating students. It lets folks pretend they're working on the problems of equity and education when in fact all they're doing is throwing around a pair of extra-large shoes.But wearing big shoes doesn't turn you into a basketball player, and passing a BS Test doesn't turn you into a highly-educated child of privilege.