Mastriano Is Flailing On Education

Pennsylvania gubernatorial candidate Doug Mastriano has a plan for education. Or at least, he had one. But the campaign appears to be trying to some damage control on the fly.

It was not a good plan. It was not even a complete plan. What we know about the plan so far is this-- cut real estate taxes to zero, replace that revenue source with nothing, give everyone a voucher (for far less than their district currently spends on each student).

PSEA took a look at his original proposal-- to cut per pupil spending from $19,000 to $9,000 or $10,000. They made the generous assumption that he would leave alone local non-real estate tax and federal revenue, and figured what that would mean in cuts. Roughly $12.5 billion, or about a third of what is currently spent on education in the state. PSEA has an interactive map on which you can look up how big a cut your local district would get. In the case of my old district, for example, it would be a cut of almost $12 million--about 35% of the local budget. And that's without any projections of students leaving for the many--well, actually, just two-- private (religious) schools in our area.

Mastriano has been responding, sort of, to the PSEA report.

First, he walked back the initial figure from a March interview (Mastriano, like the rest of the MAGA crowd, does not talk to traditional press). Now he has a video saying the new funding level will be an "average" of $15,000 per student. He still hasn't offered an explanation of where that money would come from since the state gives districts far less than 50% or 75%.

Then the Friends of Doug Mastriano, a PAC pushing his candidacy, and Mastriano himself started to push back directly against the PSEA report. Like this: 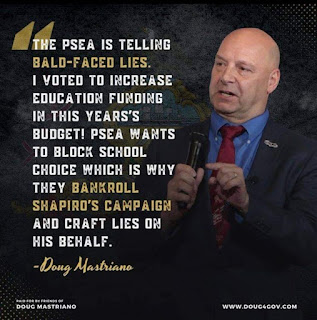 This is the epitome of the non-response response. PSEA is telling lies? What are they, exactly? If that $12.5 billion figure is not correct, then what is the actual correct one?

The Mastriano campaign has several times pushed back by saying, "I just voted for a big increase in education funding" which is rather beside the point, like arguing, "How can you say I'm kicking this puppy?! Didn't I just buy it a chewy last week?" It's not exactly a secret that Mastriano thinks that too much money is being spent on education, so it's not clear why he would want to pretend it isn't true (unless maybe someone in the campaign remembers how Tom Corbett lost his shot at a second term over cutting education by a single billion dollars).

Supporters also point at this poster: 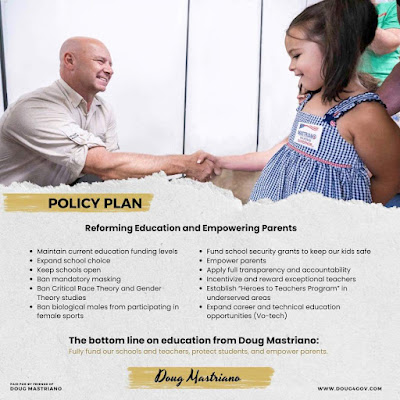 Several Mastriano memes feature this photo of him shaking the hand of this giant child, but it's the list of policy ideas that is supposed to be the sell here. It leads with "maintain current education funding levels" and "levels" is doing a lot of work here, because Mastriano has been abundantly clear that he does not want public schools to get the same amount of money they currently get. But perhaps he's decided that the whole chop funding plan isn't playing well, so maybe rewrite.

Mastriano's campaign does seem to be scrambling. When I wrote this piece three days ago, the campaign website promised a "Property Tax Elimination Task Force." The current version of his plan page (which has had its address tweaked, breaking all previous links to the page) has moved that portion of the plan from "education" over to "revive the economy." But it's still there.

Mastriano continues to tout responses to the full menu of far right grievances, victim complaints, and demands for a safe space. He'll ban CRT (though he has yet to provide a single example of CRT being taught in Pennsylvania). He'll keep schools open. He'll keep "biological males" out of female sports. He'll have a parental rights law.

But in place of the kind of plans he's been touting for months, Mastriano's website now promises

Shift funding to students instead of systems by establishing Education Opportunity Accounts for parents
"Shift" is the key word here, replacing his longtime insistence that he can just cut spending across the board with the standard voucher promise that we'll just turn school funding into education savings accounts, a kind of neo-voucher that hands some taxpayer money to parents and wishes them luck (and provides no accountability to the taxpayers who footed the bill. Mastriano also promises to pump up Pennsylvania's already-existing tax credit scholarship program (a program that lets corporations fund private schools rather than pay taxes). And yet he is still promising to cut real estate taxes to zero, thereby removing the primary source of school funding in Pennsylvania.
The giant holes in his plan remain. Local real estate taxes account for more than 50% of local school funding (far far more in some cases), so even the reduced funding levels that Mastriano has talked about will require some other source of funding.
Nor does he discuss the issue of different funding levels for students. Will students with special needs get bigger vouchers? How much bigger-- will they be funded according to the public school system, which recognizes different levels of need, or will they be funded according to the charter system, which funds all students with special needs at the highest level no matter what? Because if it's the latter, a bunch of families with simple reading or speech issues would get a huge windfall--and Mastriano's program would need even more funding from somewhere.
No local sources of funding means the end of local control. Education savings accounts without any transparency or accountability are an invitation to waste taxpayer dollars. Oh, and you may have noticed that he wants to create a "Heroes to Teachers Program," presumably mimicking his buddy Ron DeSantis's plan to put veterans and their wives in classrooms with or without any qualifications.
It's almost as if Mastriano really doesn't know what he's talking about.
That would fit. Mastriano is running a campaign built to appeal to a butthurt base. One website motto is "You've been shut down, locked out, and unheard," a message that is clearly aimed at only certain portions of the electorate (the ones who used to have "F@#! your feelings" signs in their yards, but whose own feelings are apparently much more tender). So it makes sense that his whole "cut regulations, stop crt, fix elections" shtick would include an emphasis on Rufo-style "You can't trust public schools, so we need to both clamp down on them and defund them.
But somebody at the campaign must have remembered that everyone gets to vote in the general election, so Mastriano is now doing this strange dance where on one hand he continues to promise and end to taxes and funding for public education and on the other hand he insists that funding for education will be just fine and vouchers will be awesome.
Doug Mastriano deserves to lose hard, but his Christian nationalism anti-abortion MAGA appeal is going to play well in some parts of the state. Even, sadly, among many of the teachers whose jobs will be lost under his education plan. This is going to be a scary couple of months.
Posted by Peter Greene at Tuesday, August 30, 2022
Email ThisBlogThis!Share to TwitterShare to FacebookShare to Pinterest