What a twisty road it has been for Chiefs for Change.

They were supposed to be part of the big web of education reforminess that would usher Jeb Bush into the White House, and they've been flailing ever since. They've just suggested a cool new way to expand the surveillance state, but before we look at that, let me crib from my own previous work (here and here) to explain how we arrived at our current situation. 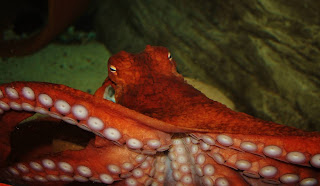 CFC was originally spun off of Jeb's Foundation for Excellence in Education (FEE), a group that lobbied hard for Common Core, school A-F ratings, test-based evaluation, and mountains of money thrown at charter schools. FEE started up CFC because they thought that the Council of Chief State School Officers (CCSSO), the group that holds the Common Core copyright and was the figurehead guiding force behind the core's creation-- that group wasn't aggressively reformy enough for the Jebster.

Initially, the group was to be a new nexus of reform, but they were immediately beset by problems. And I'm not counting the naming problem-- did they think that change would never come, or once the change was the status quo, were they going to just disband? I mean, if your brand is that you favor change, does that mean you just keep trying to change the change that you just implemented? Do you ever say, "Well, hell, no-- we don't worked hard to install that policy and we surely don't want to change that!" I'm just saying-- doesn't seem like a very well thought out name.

At any rate, by the time Jeb's 2013 Reformster Convention rolled around (incidentally, the 2016 National Education Summit is scheduled for end of November in DC-- I wonder how that's going to go), the Chiefs were already in rather a mess. Chief Tony Bennett had already had to change jobs because of that whole lying and cheating thing. And Jennifer Berkshire provides a great account of Rahm Emmanuel's speech, a weathervane moment that showed the Winds of Change no longer at CFC's back.

Since those not-so-halcyon days, CFC has decided to implement a little mission creep. In 2015 they dropped their connection to FEE, which was more than financial, but also structural and organizational. They also decided to change their definition of "chief." Previously that had meant a state-level education chief, but they had already developed a problem in that department, in that many of their big names (like Chris Barbic, Kevin Huffman, et al) were no longer actual leaders of state education programs-- six of the seventeen members in 2016 were "formers." And so "chief" was redefined to include superintendents of school systems.
That expansion continued, and since the group included so many Teach for America products anyway, they cribbed from the TFA playbook to redefine themselves as a group promoting diversity. That has included bringing in chiefs from various charter and privatization advocacy groups. These days CFC includes ten formers (one of whom is listed as "Chief in Residence"), superintendents from Ector County, Wichita and Akron, and the executive director of the Broad Center, the Yale-based version of the old Broad Academy Fake Grad School for Superintendents.
CFC has continued a string of not-very-awesome projects. There was the Student Growth Simulator, which turns out to be a calculator that does subtraction augmented by cool graphics--and the damned thing is still up. Then in 2019 they made a call for an end to "toxic rhetoric" on school choice, which turned out to mean--well...
That is why today we are calling on policymakers across the nation to end the destructive debates over public charter schools. Proposed caps and moratoriums allow policymakers to abdicate their responsibility to thoughtfully regulate new and innovative public school options: like banning cars rather than mandating seatbelts. They are a false solution to a solvable problem.
Yeah, not good old fashioned tone policing, but an actual call for people who were saying the wrong thing to just shut up.
So now, CFC has some thoughts about data collection. Specifically, they're in favor of more of it.
They've teamed up with Data Quality Campaign. DQC was set up in 2005 with ten reformster partners:
Achieve, Inc. (www.achieve.org)
Alliance for Excellent Education (www.all4ed.org)
Council of Chief State School Officers (www.ccsso.org)
The Education Trust (www.edtrust.org)
National Center for Educational Accountability (www.nc4ea.org or www.just4kids.org)
National Center for Higher Education Management Systems (www.nchems.org)
National Governors Association Center for Best Practices (www.nga.org/center)
Schools Interoperability Framework Association (www.sifinfo.org)
Standard & Poor's School Evaluation Services (www.schoolmatters.com)
State Higher Education Executive Officers (www.sheeo.org)
DQC has always been all about hard-core data mining of students, agitating for, among other things, more holes in FERPA. They continue to push for testing data to be collected.
The "report" that CFC is pushing sounds an alarm:
State and local K–12 leaders need access to actionable information about the postsecondary and workforce outcomes of former students to make decisions that will prepare current students for success.
"K-12 leaders are hungry," says the report, "for a more complete, longer-term understanding of former students' postsecondary and career journeys."
And they are not entirely wrong. My old school used to send out follow-up surveys to try to keep tabs on graduates. Heck, every time a former student visited I asked them about the good and bad of how I'd prepared them (or not) for their life. There is no doubt that having information about the trajectory of students' lives after graduation would be helpful for schools-- though fresh data from recent grads doesn't necessarily capture the long-term payoff of education, and longer-term data that is decades old might not be all that actionable.
However, it's one thing to ask for this kind of data, and quite another thing to just take it.
The list of data that CFC/DQC wants to have is large: industry data, apprenticeship data, post-secondary enrollment, completion and course data (both in and out of state), financial aid data, veteran/military data, wage data, much of it disaggregated by demographic details and by institutions. CFC says that "leaders want" this data student level, longitudinal, de-identified, in context, timely, easy to use, and "paired with support for analysis and use."
Currently, they say, "the data is not easy to find or use." So they propose a "cross-agency data governing body"-- a state office of data overlordship. A big statewide data infrastructure. User-friendly data tools, sort of like Big Brother with a convenient dashboard. Oh, and funding for all of it.
This is a huge data grab, reminiscent of the old cradle to career pipeline which also required constant data collection and crunching. Beside being a hugely intrusive extension of the surveillance state, it's also the information age equivalent of a land grab, an attempt to swoop up and take possession of a valuable before anyone catches on ("We'll be happy to take that ugly black goo seeping out of the land off your hands! It'll make things better for you, we promise!")
These attempts to launch vast, intrusive data-mining operations are not new, and they aren't likely to stop any time soon. I don't know how much juice CFC has left to actually accomplish large projects like this these days. But it's worth staying alert for any time that Big Data waves its tentacles again. And no matter how much Chiefs for Change is hard up for members, they should not be recruiting Big Brother.
Posted by Peter Greene at Thursday, December 02, 2021
Email ThisBlogThis!Share to TwitterShare to FacebookShare to Pinterest