So here's a story from my corner of the state that tells you how far the "critical race theory" panic has seeped into the ordinary operations of school districts.

Penncrest School District  is located in the NW corner of the state, located mostly in Crawford County. It's a mid-sized (around 3500 students K-12) district that was stitched together out of several very small rural districts. 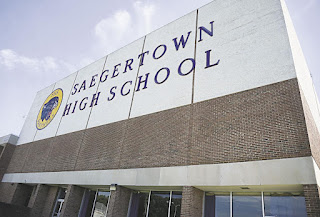 The district pops up in the news occasionally, most recently in May of this year when two board members got in a Facebook flap over a collection of LGBTQ+ books displayed at the Maplewood High School Library. Board member David Valesky posted:

Besides the point of being totally evil, this is not what we need to be teaching kids. They aren't at school to be brainwashed into thinking homosexuality is okay. Its [sic] actually being promoted to the point where it's even 'cool'.
Board member Jeff Brooks responded
There have always been gay students in our hallways. And unfortunately there have always been hateful voices looking to discriminate against them. Let's just be a little better today and not make kids [sic] lives worse by being hateful, bigoted and prejudiced.
Valesky later told the local newspaper that "he was against the school 'pushing' such topics onto the students," and that schools shouldn't have anything to do with "kids determining their sex or who they should be interested in." Brooks expressed his opposition to censoring books at school and that schools "need to be a safe place."
So their board is used to some argument over issues.
Fast forward to this month. High school English teacher Stacey Hetrick has gotten a spot as a presenter at the Pennsylvania Council of Teachers of English and Language Arts conference. It's a great privilege, and the conference itself is a great professional builder. The conference is on Friday and Saturday in Harrisburg; Hetrick wanted the board to approve a day off to attend on Friday. She was paying her own registration for the conference; her presentation was entitled "Using audio analysis to maximize independent reading time."
But David Valesky had dug through the schedule for the conference and didn't like what he saw. Like any such conference, the gathering included multiple session offerings in time slots throughout the two days. These concurrent sessions include a wide variety of selections, from "How do I foster a growth mindset" to "Teaching with poetry." But one of the five threads in the conference deals with "social justice movements in literacy education," and that included some sessions that alarmed Valesky, like "Building an anti-racist lens in your classroom" and "Elevating diversity starting with the traditional curriculum."
The Penncrest Board is currently considering a policy to ban what it imagines to be critical race theory from the district. So Valesky was primed to spot tell-tale signs.
“Obviously, the entire thing is laced with aspects of critical race theory,” he said. “That’s not what English is for.”
Valesky's old pal Brooks noted that having a teacher learn about anti-racism "might be worth our time."
The board denied her request 5-4.
Note--this is not a CRT anti-racism conference. It's just a conference at which many, many topics will be discussed, anti-racism and diversity among them. But five members of the board couldn't bear to even have Hetrick in the same building as these dreaded ideas.
They could have congratulated her on being selected to present and told her to make the district proud. They could have, I suppose, tried to forbid her to attend any of the naughty presentations. They could even have weaseled around the issue by simply saying (as many districts would) that it's too hard to get subs on Fridays and therefor they couldn't give her release time. But instead they did this.
Members on the losing side were angry. Robert Gulick was one of the four:
“I have never been more disappointed in this school board in my entire career, four years of being on this school board, and I have never been more disappointed about the overreaction, about the craziness, the insanity,” he said.
Hetrick had no comment for the paper, and did not indicate whether or not she would attend the conference, but she's no longer listed on the schedule.
Posted by Peter Greene at Tuesday, October 19, 2021