Before Betsy DeVos was Secretary of Education, she was a relentless, wealthy privatization advocate, and there was never any chance that she would walk away from her old job once she was done with the new one. It's just that now she can put that "former secretary" in front of her name. 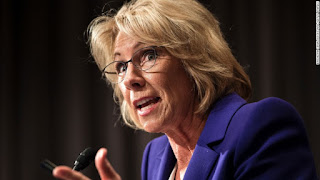 So it should come as zero surprise that she turned up last week sharing an op-ed on Fox News, joining in that popular Edu-genre, the "Oh Nos! The NAEP Scores!!" essay. Which shows some bravery on her part, because actually the cries of anguish have been relatively subdued this year, even though the NAEP (The Nation's Report Card) produced some nearly-newsworthy results this year.
DeVos gets her licks in at "learning losses during the pandemic caused by the unnecessary, union-driven school lockdowns" (pretty sure somebody missed a comma--I don't think she meant to blame the actual pandemic on teachers unions), but that's not what she's here for. She here for the that shows some NAEP score drops before the pandemic pause actually hit.
Math scores, says DeVos, for the lowest 10% of thirteen year olds dropped by 13 points. Reading scores for the lowest 10%  of nine year olds dropped by 7 points. She's a little fuzzy on the "since when" part of this, but since she brings up 2012, the last year with figures for the Long Term Trend assessment has figures for. Her reporting does not exactly match NAEP's own reporting; they show smaller drops over that period. But everyone agrees that it's the first time the scores have ever dipped. Mostly NAEP scores of the various shapes, sizes and periods, have stayed stagnant.
But DeVos is alarmed. These results are "abysmal."
However, she wants you to know that this is not because of a lack of spending, which is what "the education establishment would have you believe." No, the US spends so much money on education. It has nearly tripled since the 1960s (when Betsy and I were in elementary school). She says we spend 35% more per pupil than every other major developed nation, which is not what her link to the NCES says-- they say that the US spends 37% more than the average of OECD countries, which is just sloppy.
And by the way, DeVos wants you to know that the Department of Education was established as "a pay-off from then-President Jimmy Carter to the teachers union bosses who funded his campaign." And since they were founded, the US has spent $1 trillion trying to "close the gap." I'm assuming she's talking Title I money, which was not spent to close a gap but to help lift up those at the bottom. Not the same thing. Closing the gap would be trying to get hungry folks the same food that rich people are eating; lifting them up would mean they don't go hungry. "Closing the gap" is an admirable goal, but almost impossible to attain unless you make rich folks sit on their hands. But I digress. $1 trillion.
But all that money hasn't "moved the needle when it comes to results," and like many good classic reformsters, DeVos will just skip over the part where we establish why we should use a standardized test of math and reading as a needle, and what exactly the consequences of not moving that needle might be.
But she knows how to move that needle.
The one and only thing that has continually demonstrated an ability to improve student achievement is school choice. A recent University of Arkansas analysis of data from the Nation’s Report Card found that students in states with the greatest level of education freedom recorded higher achievement levels.
The research that she links to is a bit of a hash, and her whole argument confuses causation and correlation, and she really fuzzes up the difference between a real gain and a percentage gain-- generally speaking, DeVos cannot be trusted when she starts throwing numbers around. But she smells public school blood, so she's determined to hit every point on the greatest hits list.
You might think another sobering Nation’s Report Card might force the education establishment and the union bosses to implement ideas to improve literacy and numeracy. But, of course, they’re not.

Instead, they’re spending their time defending critical race theory-infused teaching and calling the FBI on parents who voice opposition to their children being indoctrinated.
I do wonder who the "education establishment" might be, but you know-- evil indoctrinators, etc etc. And just to round things out, here comes the same old quote from A Nation at Risk, a work that warned we were on the brink of a national collapse because of education, and we've now been waiting for that collapse, any day now, for forty years.
Look, anybody can play correlation and causation games with the NAEP numbers. What has happened since 2012 that might account for a drop? Well, we've filled schools with the first generation to grow up under Common Core and test-centered education. The test that gave us these "abysmal" numbers was taken on DeVos's watch at education.
A serious person in the reform biz would look at those numbers and say (or at least think), "Gee, we've been implementing lots of our policies and they don't seem to have helped." But Betsy DeVos has never been a serious person, and her absolute certainty that public education must be swept away and replaced by a free market system in which people can rise or fall as they deserve limits the scope of her vision. As little respect as I have for standardized testing as a measure of educational effectiveness, it may well be that there is something to find in these NAEP results, but DeVos is certainly not the person to go looking.
Posted by Peter Greene at Tuesday, October 26, 2021