Remember Nevada Family Alliance, the activist group that may or may not just be one person with some software and a wifi connection, and that one person, a lady named Karen England, may or many not be a big ole scam artist.

I'm still on NFA's mailing list, and my last check-in from my friend Karen, whose latest email is just loaded with stuff. Well, three stuffs. Let's take them one at a time, because she certainly captures some features of the current anti-stuff panic. 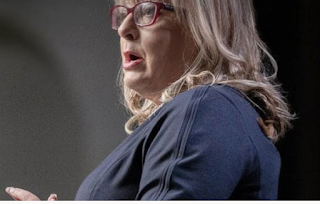 First, she wants you to know that she has a map of all the places where teachers have signed the Zinn pledge to Teach Bad Things No Matter What. That includes a link to the list to the names of Nevada teachers on the naughty list, which is actually a link to the website Cameras in the Classroom. It's a dumb idea, but it's been the one way that England has broken through to some larger coverage. It's her thing. And she assures us that this is supported by Russ Vought. Vought was director of the office of management and budget 2020-2021 under Trump. He used to work for the Heritage Foundation, but these days he runs Citizens for Renewing America, one more Trumpy critical race theory panic group. Also signing on are Mark Levin (who has featured NFA on his radio show), Becky Norton Dunlop (Heritage Foundation), Charles Cooper (founder of a "leading litigation boutique") and Brandon Zehm (tech bro). More coming soon, the website assures us.

The website further warns us about cultural Marxism, the attempt to start a race war, and offers this irony-free quote from England, this time in her capacity as executive director of the Capitol Resource Institute, another of England's anti-Progressive groups. Anyway, here's why we need cameras in the classroom-

Every day we are told of another incident where a teacher is violating the privacy of a student or contradicting the lessons taught by parents at home.
You know what would really violate the privacy of a student? Having a video record of everything they did in school. Imagine some parent deciding that your kid is causing problems for their kid in school, and demanding to see what your kid has been doing in class. Yikes.
Anyway, we came to this site so we could look up exactly which teachers, by name, are Indoctrinating Our Children. However, to see the map/database, the site requires you to give up your name, email, and zip code. Almost as if this is a data gathering exercise rather than an attempt to liberate our children.
So, second item in the email. An item about the 17 state attorneys general who wrote to Joe Biden and Merrick Garland to protest the targeting of parents at school board meetings.
"Your recent action seeks to chill lawful dissent by parents voiced during local school board meetings by characterizing them as unlawful and threatening," the attorneys general wrote in the letter.
While I have some misgivings about the AG's action, but at least it's not as if they made a website where you could look up the individual names of misbehaving school board members with an exhortation to "double down" and let them know they can't get away with what they're doing.
Irony is so dead, and I'm pretty sure I don't want to hear complaints about "cancel culture" from any of these groups ever again.
Part three? That is, of course, the plea for money. "Please Join with NFA," she says, because they "relies solely on the generous giving from people like you and from the many churches and organizations that support us." That link takes you right to their Square site.
The address for NFA is the same as that of Capitol Resource Institute; an office building in Sacramento, CA. Nevada Family Alliance's website URL is actually www.reclaimingourschools.com. There's a whole England trail that leads back to her failed attempt to commandeer GOP politics in California.
It's such an unprincipled mess. Don't try to chill expression on our side while we try to put your side in a deep freeze. Privacy for me, but not for thee (and not for me, either, if I thought this through for even fifteen seconds).
Posted by Peter Greene at Wednesday, October 20, 2021