Speaking of Indoctrinatin' Literature: Ayn Rand in the Classroom

So here comes the umpteenth set of protests/complaints/caterwauling over literature in schools "promoting critical race theory," aka "any books with Black people in them." The Northampton Area School District of  Northampton, PA was offered a a stack of books by The Conscious Kid, an organization that plans to donate 120,000 books "that foster anti-racist conversations and action" to 3,000 schools nationwide.

These books are not donated to the school library, which means nobody has to read books like Hair Love or a Ruth Bader Ginsberg bio. And just in case anyone's still worried, the board specifically resolved that acceptance of any gift or donation does not constitute an endorsement. Nevertheless, at least ten folks are vocally upset because that's just where we are right now.

The Conscious Kid is not the first group to discover how excitedly schools react to the phrase "free books." No, we have to look elsewhere for that title. 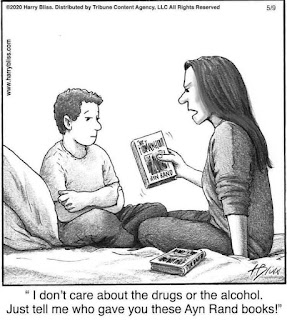 In fact, the child probably got the books in English class.

The Ayn Rand foundation has long offered complete class sets of four Rand novels to... well, anybody teaching anything in a school. You can also enter your students in an essay contest, but it's not required. In fact nothing is required, but hey--free books!

Here are the available choices, with a quick summary just in case you've never had the pleasure.

Anthem It will come as no surprise to readers that Rand first came up with this as a teenager. Vague to the point of barely cloaking her argument in characters and plot (Characters in totalitarian collective dystopia fall in love and run away, pledging to bring back individuality).

We the Living Three young people struggle to pursue their own happiness and individuality against the backdrop of post-revolution Russia. Rand's first published work. Middle class life and individuality are crushed under the Soviets, and all three characters meet a wretched end. It stands out from the other works by virtue of not including her heroically perfect ubermensch; that and its anchoring in actual history makes this the most tolerable Rand for some readers.

The Fountainhead Howard Roark, an architect, is Rand's perfect man, and everybody else is a two-dimensional character created to represent one of society's terrible flaws, allowing Rand to explain exactly why the stupid world doesn't deserve Roark's awesomeness. Thick, but readable, and matches Lord of the Flies as a book that can launch a thousand essays about symbolism because the use of symbol-heavy characters is a subtle as a two-by-four. But watch out for the rapey angry sex parts.

Atlas Shrugged Randian polemic at both its Randiest and polemickiest. It actually starts with a fun narrative hook-- steel magnate Hank Rearden and his lover Dagny Taggert are investigating the mysterious disappearance of various US captains of industry even as industry falls apart. Turns out that Rand's superman, this time named John Galt, is convincing the great business leaders to run off to a mountain hideaway for a general strike, waiting to come out and rebuild/save the nation once all the incompetent jerks have run it into the ground. Eventually Rearden and Taggert are swooped off to the Heroes' Retreat. Taggert leaves Rearden for John Galt, but that involves zero drama because Rearden recognizes that Galt is The Man, so of course she wants to trade up. Somewhere in the middle of this monster, the narrative drive grind to a halt under the weight of Rand's preaching. Then, about 100 pages from the end, Galt takes over the world's media and starts to deliver a speech and you think, "Well, he'll talk for a bit, and then all the plot will be resolved" but no-- he talks for a really, really long time. In a whirlwind finish, Galt is captured, humiliates his captors via their suckiness, and announces that now his bunch o'heroes can now come back and save the world. This is a terrible, terrible novel, but Rand considered it her magnum opus because she said most of what she had to say. Twice, even. Every politician who's ever talked about "makers and takers" has, I guarantee, read this one.

I keep dreaming of the day when someone objects to teaching these books on the basis of Rand's virulent anti-religion feelings. And in fact there's a whole sub-group of folks who connect Rand to Satanism. But sadly, no mobs are storming school boards to chase That Woman out of the classroom. Maybe crediting her as the mother of Satanism is a bit extreme, nut conservatives who believe that Rand's objectivism and Christianity are compatible are kidding themselves. Rand was abundantly clear. For instance, in Anthem, she writes:

And now I see the face of god, and I raise this god over the earth, this god whom men have sought since men came into being, this god who will grant them joy and peace and pride.
This god, this one word: I.
Or this 1959 interview with Mike Wallace:

Mike Wallace: You are out to destroy almost every edifice of the contemporary American way of life, our Judeo-Christian religion, our modified government regulated capitalism, our rule by majority will. Other reviews have said you scorn churches and the concept of God. Are these accurate criticisms?

Ayn Rand: Yes. I am the creator of a new code of morality.

You can see how Rand's brand of individualism can be a hit with some teenagers--you owe nobody anything, and the highest moral good is the pursuit of your own desires and goals. I'm just not seeing that as a great message to pass along. Nor do I think Rand's work can be justified by virtue of any particular literary excellence. At best, she might make an appearance in a study of far right ideology.

The website says 65,000 teachers have grabbed up these books, and I'd be curious to hear what they have to say about why these works in place of all the other available works in the English-speaking world. I wouldn't for a moment propose that these books be banned, but I find it just weird that we've got to have panic attacks over books like Hair Love, an adorable book that was selected by Dolly Parton's Imagination Library, about a Black father helping his Black daughter style her hair, even as we let Rand slip into the schoolhouse with nary a peep. 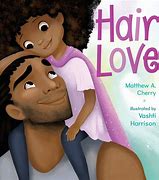