It's worth remembering that they told us what they intended to do. From back in March... 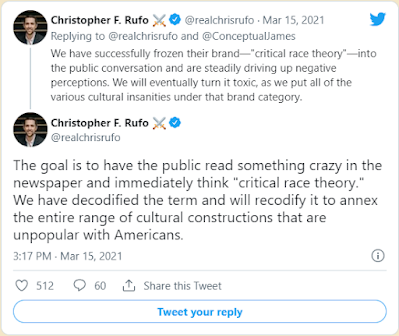 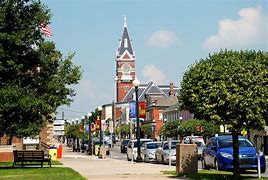 Just up the road from me, you can see this in action.

Clarion County, despite containing a state university, is a mighty conservative place. Back in March, the County Commissioners, for no particular reason, declared themselves a "Second Amendment County." Now, one of the county's school districts has let itself get played by the "critical race theory" flap.

Parents showed up to complain about the possibility of that race stuff sneaking into schools, supporting the board's newly-minted policy. The policy follows the usual template, borrowing language that is being used in these policies all across the country, such as

The teaching concepts which impute fault, blame, a tendency to oppress others, or the need to feel guilt or anguish for persons solely because of their skin color, race, sex, or religion are prohibited in the district as such concepts violate the principles of individual rights, equal opportunity, and individual merit underpinning our constitutional republic and therefore have no place in training for administrators, teachers, or other employees of the district.
That same language was adopted by the Mars School District, located just a bit north of Pittsburgh (and in California, and Alabama, and so on...). While the basic policy seems to be getting copied and pasted all across the US, folks feel free to add some details as well. In Mars, there was an addition of patriotic patriotism ("We will teach our children to honor America..."
Because these policies also come with a built-in "This is totally not saying that teachers can't teach controversial stuff, but only, you know, factual stuff and only all sides presented," there's also a list of Stuff That Can't Be Taught.
Further, this policy shall ensure that Social Justice and unsubstantiated theories of any kind, including but not limited to Holocaust Denial Theory, 9/11 Theory, The 1610 Project, and Critical Race Theory, are not advocated or presented to students as part of any curriculum unless approved in advance by the board.
Holocaust Denial and 9/11 Theory (which is...what? They presumably mean Trutherism) give the list some illusion of balance, but we're balancing a couple of loony conspiracy theories with the work of actual scholars. The list can be augmented with anything that current board members don't like--one board member in Clarion wants to add "gender theory" to the list.
Even in the rural areas of a state that has, so far, avoided this nonsense on the state level, the usual talking points have penetrated. CRT is really racist. It's indoctrination. This doesn't take any freedom away from teachers.
Well, of course it does. It creates a chilling atmosphere, where virtually anything could turn out to be somebody's idea of indoctrination and teachers, who are already busy navigating a pandemic in which folks think being asked to wear a damn mask is both indoctrination and oppression, must either brace themselves for the possibility of an attack at any time, or avoid anything at all that might offend someone (good luck, history teachers).
And as backdrop to all of this, we have an actual anti-mask political candidate declaring, in public, on purpose, that people should take "twenty strong men" into board meetings and give the board the choice of leaving or being thrown out.

(More about this guy here.) This is dangerous stuff. The real conversation that spreads this looks something like this.

Small Number of Parents: We don't want any Yetis in our school.

School: Great. We don't have 'em. Never have.

SNOP: Well, they have fuzzy hair, and we see that some of your teachers have pictures of fuzzy animals in their room. What about that?

This is going to get worse--and scarier-- before it gets better.

Posted by Peter Greene at Monday, August 30, 2021
Email ThisBlogThis!Share to TwitterShare to FacebookShare to Pinterest