Fear and Silence in the Classroom

It comes down to administrators.

States have moved from passing vaguely-worded laws about That Race Stuff and on to the penalty phase. I don't know know exactly how well the anti-CRT crowd understands what they're doing, but it doesn't really matter. At this point, it is all about scaring administrators.

Tennessee has emerged as a big player in the Stifle Teachers Olympics, and they've come up with a proposed penalty system for punishing naughty schools that "knowingly violated" the state's vague and poorly defined law by withholding state funds for the district: 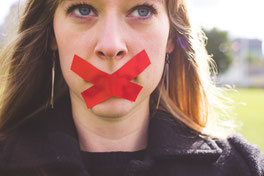 You may ask, "How can the state enforce such a law?" The answer is, it won't have to.
Cue the quiet freaking out of administrators, because if there's anything they don't want to deal with, it's budget cuts.
And Tennessee is already swarming with Moms for Liberty, whose definition of objectionable content is pretty broad. These are the folks who object to a textbook including a book by Ruby Bridges about her experience desegregating schools; it upsets them because it portrays raging white opponents to desegregation (aka "reality") and because the story doesn't end with redemption (aka "reality"). These folks see critical race theory everywhere, and they've already been trying to get local politicians to strong-arm the district considering the text.
In other words, Tennessee school administrators already know that there are scads of activists just waiting to cry "CRT!!" at the first sight of anything they find at all objectionable.
There will be school administrators who steel their spines and stand up to do their jobs, which are to make it possible for teachers to do their jobs. But that will not be all the administrators.
You may ask, "How can the state enforce such a law?" The answer is, it won't have to. Panicked administrators will stage pre-emptive staff stifling. They will hold beginning of the year professional development on the topic of "For God's Sake, Don't Bring Up Anything That Could Possibly Remotely Be Connected To This." They may demand to see teacher resources and start banning works from the school. They may issue a list of forbidden topics, lists that look a lot like "anything remotely related to race and history."
Enforcing the anti-CRT laws will be hard, but it won't matter, because teachers are going to be gagged before the first Liberty-Lovin' Mom gets on the phone to turn someone in. The combination of these laws and the many mechanisms being put in place to turn in your local district may result in very few actual penalties, but they create an atmosphere of fear, an atmosphere that stifles teacher speech. And that goes double for right to work states where teachers can lose their jobs just for opening their mouths; district leadership may not disagree with what that teacher wants to say, but they will see teachers who risk an avalanche of phone calls as just too much potential trouble.
In short, these laws are not really about penalizing some bad teachers; they are about silencing all teachers.
Posted by Peter Greene at Monday, August 02, 2021
Email ThisBlogThis!Share to TwitterShare to FacebookShare to Pinterest