First of all,  we should note that this guy is not a gubernatorial candidate. He's running for Northampton County executive. He's a Trumper through and through. He's a QAnon-quoting, insurrection-joining part of the January 6 crowd (though in one of his later interviews he claimed he didn't go into the building, which is on par with "I didn't inhale"). He's been working his way into politics, and his facebook page says a lot more about the Patriot Party than the GOP 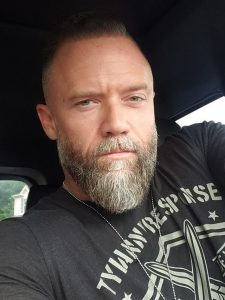 At his campaign website, you can learn that he's a strict constitutionalist and a business owner. The business is Keystone Alternative Medicine and Weight Loss, including testosterone and hormone replacement therapy for anti-aging and sexual health. Before that launched in March 2020, Lynch created Creation Fitness, as well as Steve Lynch Fitness. He's worked mostly in the personal training biz, with occasional forays into financial services. His college work was in Criminal Justice/Law Enforcement Administration; one wonders why he didn't end up in those fields. He's also the chaplain for Allentown Rescue Mission, where it's his work to "prepare and deliver Biblical messages monthly" to the men at the mission.

Some of his supporters are just what you'd expect ("Kikes and shitlibs are having a meltdown" over his speech). Lynch expects a conservative uprising in PA soon. On his Facebook page (top photo-- "audit everything") you can see him hanging out with Ian Smith (the gym owner who offered free memberships to those who refuse vaccination) and expressing support for Nche Zama, the heart surgeon running for the GOP gubernatorial spot.

So, fringy, but not nearly as fringy as you might have hoped. This is what we've got running for office now-- guys who believe in law and order and punching people that don't do what you want them to. One more reason it's getting harder to get people to run for school board.

Posted by Peter Greene at Monday, August 30, 2021
Email ThisBlogThis!Share to TwitterShare to FacebookShare to Pinterest