Chester Upland School District in Pennsylvania has the distinction of having been put through every gauntlet that a modern school district ca be forced to run. Currently, that means that CUSD is facing a partial takeover of the district by charter operators.

Parents, taxpayers and teachers within the district have not developed much trust in the various processes put in place to "help" the district. That may be related to the parade of shady shenanigans along the way.

In particular, there's the cozy relationship that so many folks seem to enjoy with Chester Community Charter School. CCCS is, itself, a shady operation that started up in conjunction with CSMI, a charter management organization founded by Vahan Gureghian, a guy who runs a billboard company and CSMI and is now, after 23 years in the charter biz, really really wealthy. There are three charter companies operating in Chester (so far) but CCCS is by far the dominant one. How big a pile of taxpayer dollars does CSMI rake in? You aren't allowed to know--they're a private business.

CUSD is under state receivership, but it's often unclear whose interests are being guarded. In Pennsylvania, charters are only supposed to be renewed for five year spans, but receiver Peter Barsz went ahead and gave CCCS a nine year contract. The argument was that this would "save the district" by getting a deal that the charter would not try to extend its reach to high school students. Except that word on the street was that the charter had no interest in high school students. That's been confirmed; while charter operators are currently making their bids to take over schools in the district, nobody has made a pitch for taking over the high school. So Barsz gave CCCS a big fat gift in exchange for a guarantee that CUSD would not be attacked by yetis riding on unicorns.

It was a great deal for David Clark, the CCCS CEO. Dr. Clark is the community face of CCCS, well-regarded enough that the city leaders decided to give him a whole honorific ceremony. And when folks got heated up over the CCCS petition to charterize the district back in 2019, Clark took to the paper to say, "They did not petition to take over the school." Technically true--they petitioned to have bids opened for charter schools, however as Chestrer's only charter heavy hitter, they were (and remain) the obvious big winners in such a move. Clark also claimed that Gureghian didn't found CCCS, which is a distinction without a difference. In fact, the actual founding of CCCS is a bit opaque, but it's clear that launching the school also launched the charter management organization that runs it and which was founded and owned by Gureghian. Clark adds "nor was he even involved with the school when it was established." That puts us in gaslighting territory; certainly it does not establish Clark as a straight shooter.

But Chester has attracted an endless stream of not-straight shooters. The district has trust issues with its own board, which has been spectacularly reluctant to conduct any of this charterization business out in the open (even though the court told it to). They've hired administrators seen as favorable to charterizing. Fred Green ran an unconventional campaign for the board and won, immediately offering pro-district words in support of a "Local Control Is Our Goal" rally:

We encourage residents and community supporters to come out and help us fight to take back our school district and get it back into local control.
But when CCCS recently opened a new campus in Aston to help it expand into the Philadelphia market, this was part of the scene: 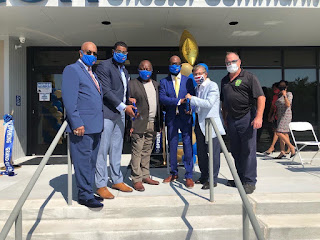 There are two pairs of scissors there for the ribbon cutting. The pair on the right is being held by Dr. David Clark. The pair on the left is being held by Fred Green.
Chester Upland School District is plagued by broken promises about things large and small, repeated problems with mysterious disappearing money, and a lack of allies in any powerful places. When their woes are tallied up, we have to include an erosion of trust. What a rough place to be.