Free Charters Are Not Free

The Heritage Charter Academy of Cape Coral, Florida plugs itself as a "free public charter school," but that turns out to be not entirely true.

As reported earlier this week, the charter schools of Cape Coral are in deep financial trouble. The charters run by Oasis Charter Schools can't afford their lease. So they are facing some serious deficit spending issues, as described by a city official:

“If everything stays the way it is today right now … their fund balance would actually be depleted by 2024,” Assistant City Manager Connie Barron said.
Cape Coral is a city in southwest Florida of around 200,000 people, which is impressive given it was launched as a real estate development in 1957. The city actual incorporated in 1970. Now it's the eighth largest city in Florida, built not so much on swampland as around a network of canals. 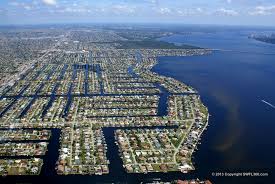 The charters come under the City of Cape Coral Charter School Authority and fall within the Lee County School District, which earned its spot in history back after Brown v. Board of Education ruled that segregation was illegal, Lee County handled that new reality by simply ignoring it. This led to some civic strife and a set of court orders, some of which are still in place. Charter School providers include infamous charter chain Charter Schools USA (which is pretty busy in Lee County).
Bottom line: Cape Coral can't afford its current charter school set-up, and in fact is already making some iffy choices to keep the charters afloat:
“We only receive $1.5 million,” [Oasis Superintendent Jacqueline] Collins explained. “Our lease is $3.2 million every year, so to pay that that, we had to take from our [Florida Education Finance Program] funding, which really is designated for students and instruction.”
So they're already short-changing students in order to meet lease costs. That FEFP pulls money out of two piles--sales tax money and a state-mandated cut of local real estate taxes-- and gives it to charter schools because the money that "follows the student" isn't enough.
The report initially says that the city has only two choices--let the charters fail, or bail them out-- but then a few paragraphs later, there's this:
Cape Coral City Council is on record wanting to help the city’s four charter schools by allocating $2 million a year starting in fiscal year 2022 and reducing the lease to $1.5 million a year. But nothing has been approved yet.
Which Collins characterizes as "them helping us with this lease payment." So there's plenty about this remarkably under-reported story that is not entirely clear (what do they lease, and from whom). What is abundantly clear is that the taxpayers of Cape Coral and Lee County are paying more to have duplicate school systems.
That's totally fine. I've always argued that I would have far fewer objections to charter schools if we were just honest about the cost, but oddly enough, as yet no politician has stood up to say, "We want a select few students to have the benefit of a private school, and we think that's so important that we are going to raise your taxes to do it." The city government of Cape Coral might be getting close to doing just that, and if so, God bless them. In the meanwhile, let's just stop pretending that we can add multiple extra schools to a system at no extra cost.
Posted by Peter Greene at Wednesday, March 03, 2021