USED Secretary Miguel Cardona appeared on All In With Chris Hayes, and while much of the interview centered on the issue of re-opening schools, it also included this exchange:

500 researchers and scholars wrote a letter to you basically saying, don`t force schools to give standardized tests this pandemic year, that it made no sense. It would exacerbate inequality and produce flawed data. There will be standardized testing this year. Why do you think that`s a good idea? 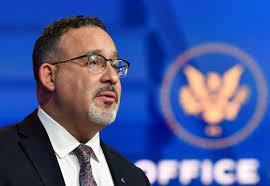 CARDONA: You know, this is analogous to the decisions, the difficult decisions that leaders had to make last July when we talked about reopening schools. And we know that there`s no one-size-fits-all. You know, when we were thinking about reopening schools, we have very small schools and we have very large schools, and states that had high numbers and states that have very low numbers of COVID. So, there`s no one size fits all.

So the flexibilities that were announced by the department last month, allowed for some of that variance. But let me tell you very clearly, that when we`re pushing out $130 billion state-level data, not necessarily the classroom data, because teachers know where their kids are, but that state- level data is going to ensure that we`re providing the funds to those students who are impacted the most by the pandemic.