Trump and DeVos Can't Make Up Their Damned Minds About Schools

It doesn't seem all that hard to figure out how Donald Trump and Betsy DeVos feel about public schools in this country. And yet, they seem oddly conflicted.

DeVos famously called public schools a "dead end." Just last week, reflecting on the SCOTUS decision, she opined that the history of American education is "sad and static" and "too many students have been discriminated against based on their faith and have been forced to stay in schools that don't match their values." 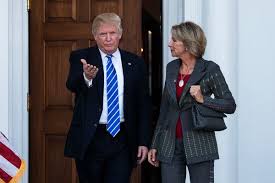 Trump is admittedly a tougher read, since he's mostly ignored the topic, at least until he worked out that being pro-voucher would be good for some Catholic votes. Just last Friday he was standing in front of Mount Rushmore declaring--

So schools are awful, terrible things that ought to be shut-- wait! What's that?

Trump tweet-hollers "SCHOOLS MUST BE OPEN IN THE FALL" and DeVos tweeters back, "American education must be fully open and operational this fall.”

And they really, really mean it because they promise to get schools the resources to safely--ha! No, just kidding. But Trump does threaten to cut school funding for any schools that don't open, and DeVos backs him up, slamming adults who are just too chicken and insist on making excuses. And Mike Pence has stepped up to let us know that the CDC is going to rewrite the guidelines for school re-opening so that it won't be so hard or expensive.

So apparently schools are not evil drains on America, but essential infrastructure that is so essential that getting schools open again is far more important than battling a pandemic or keeping students, teachers, staff and family members safe. Schools are not dead ends, but so hugely important that nothing should stand in the way of getting them open. OSHA, the CDC, worried parents and teachers--none of them are as important as getting schools open again. Indoctrination is good, and we should get back to it? I was making stuff up before and now I would like to make up different stuff?

Who knew that Trump and DeVos thought schools were this important? I suppose the cynical view here is that they don't give a rodent's posterior about schools, but just want to get babysitting services up and running so that all the meat widgets can get back to work making their corporate overlords richer. Or the cynical view that Trump needs things to look normal to bolster his election. Or the really cynical view that by forcing public schools to open without the funding or resources they need to do so safely, the feds can drive worried parents away from public schools and into the waiting arms of the various privatized options.

Well, it's possible that everyone in public education is now discovering that the feds like us, they really like us. That schools are super, super important and not really awful after all. That Trump and DeVos have had an education epiphany. It's a mixed message puzzler, for sure. We'll see how education stands in a month or two.
Posted by Peter Greene at Wednesday, July 08, 2020
Email ThisBlogThis!Share to TwitterShare to FacebookShare to Pinterest