One of the big pull quotes from Donald Trump's historically shallow paean to the idea of American exceptionalism on July 3rd at Mount Rushmore, an attack on public education and the teachers who work there echoed at other points in his speech. 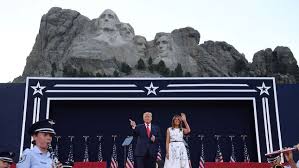 There can't be more than 11 undecided voters in the country right now, and very little likelihood that this campaign will be about winning folks to one side or another. It will be a contest to see who can get the most people to actually vote. That means energizing the base, which in Trump's case means a steady diet of "They are coming to get you, and only I can protect you from them." The "they" includes all those brown and black folks (you know, except for the "good" ones) and anybody who wants to say anything critical about the country, or about this President. They are coming to get you, and only the strength of Beloved Leader can stop them. Also, Jesus, freedom, America.

Well, the administration has been clear on its anti-public education bona fides. But it has also been clear about using private school vouchers as a means of currying favor from the Catholic Church, by far the largest beneficiary of voucher programs. Trump and DeVos have both been painfully clear that they want to quid pro some quo when it comes to Catholic school support and Catholic votes for Trump.

Then there's the matter of the unions, which provide much of the financial and organizational backbone of the Democratic party (okay, "backbone" and the Dems don't really go together, but you get my point). So anything to weaken them helps feed the hard right dream of one-party rule in the US.

It seems like an odd choice, given that large number of teachers voted for Trump. Why risk turning them off? Probably because there is no risk--at this point it's clear that the Trump base voter can't be turned off by anything. Literally anything. I expect that teacher Trumpers will look at any criticism of teachers and say, "Yeah, he's right. These jerks I work with are awful. He's not talking about me, though." It's a version of the old question of why asshats have friends--because the asshats friends say, "Well, sure he's an asshat, but I feel certain he'll never be an asshat to me."  This is one of the great tricks narcissists can pull off-- to make you feel so charmed that you can see every one of their terrible faults, but feel certain that you are exempt from their effect.

An attack on teachers is also part of the attack on all sources of authority outside of Beloved Leader, as in the point last night where he blamed all the rioting on "the predictable result of years of extreme indoctrination and bias in education, journalism, and other cultural institutions." In other words, there are no institutions you can trust, no source for evidence that can be believed, because They have corrupted them all. Only Beloved Leader remains pure.

So, yes. There was never any question that Trump was going to come at public school teachers, all busily teaching children to hate America. Expect more of the same in the months ahead (including from the students of Trumpers that are in your classroom). 2020. Hell of a year.
Posted by Peter Greene at Saturday, July 04, 2020
Email ThisBlogThis!Share to TwitterShare to FacebookShare to Pinterest