To Everyone Who Was Never A Classroom Teacher, Re Pandemic School Openings

To everyone who was never a classroom teacher but who has some ideas about how school should be re-opened in the fall:

There are some special categories of life experiences. Divorce. Parenthood. Deafness. Living as a Black person in the US. Classroom teacher. They are very different experiences, but they all have on thing in common.

You can read about these things. But if you haven't lived it, you don't know. You can study up, read up, talk to people. And in some rare cases that brings you close enough to knowing that your insights might actually be useful.

But mostly, you are a Dunning-Krueger case study just waiting to be written up.

The last thirty-seven-ish years of education have been marked by one major feature-- a whole lot of people who just don't know, throwing their weight around and trying to set the conditions under which the people who actually do the work will have to try to actually do the work. Policy wonks, privateers, Teach for America pass-throughs, guys who wanted to run for President, folks walking by on the street who happen to be filthy rich, amateurs who believe their ignorance is a qualification-- everyone has stuck their oar in to try to reshape US education. And in ordinary times, as much as I argue against these folks, I would not wave my magic wand to silence them, because 1) educators are just as susceptible as anyone to becoming too insular and entrenched and convinced of their own eternal rightness and 2) it is a teacher's job to serve all those amateurs, so it behooves the education world to listen, even if what they hear is 98% bosh.

There's a whole lot of discussion about the issues involved in starting up school this fall. The discussion is made difficult by the fact that all options stink. It is further complicated by the loud voices of people who literally do not know what they are talking about. Here's a handy flow chart to help you work it out. 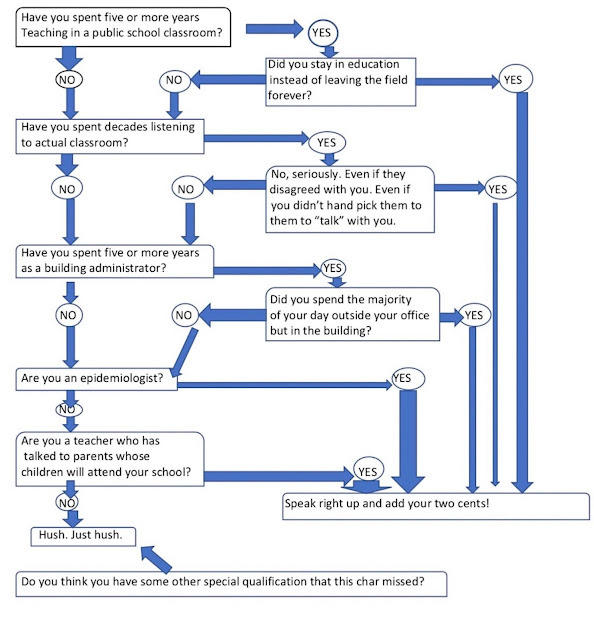 Media can help with this. There is no reason for anyone to interview Arne Duncan or Jeb Bush about how to re-open schools in the fall. Knock it off with that sort of thing, please. And now it turns out that Bill Gates has given the Chiefs for Change, a group of reformy amateurs who keep failing upwards, $1.6 million "to provide a co-branded (CCSSO and CFC) set of comprehensive COVID-19 state education reopening plans that address health and safety guidance at both the SEA and LEA levels." That's no help, either.

Look. Actual teachers have already thought of at least a dozen different issues that haven't even occurred to the usual gang of edu-amateurs. Solutions to the fall will be local and specific, and it's the people on the ground who will come up with them (they have to, because state and federal authorities vary somewhere between silently useless and just plain useless). The goal here is not  something that can be "scaled up." The goal is to come up with a way for your local school to survive and do its job. I'll say this again-- if you have not lived a significant portion of your professional life inside a school, you just don't know. You are just a person at an accident scene who thinks he should get to direct life-saving efforts because you watch a lot of medical shows on tv, or you're very rich and important, or you smell a profitable opportunity, or you just want to.

Yes, there are some scholars who mostly get it, and a lot of stakeholder voices that must be paid attention to (starting with parents, parents and more parents). But for the rest of you who think that just because an idea about education passes through your head, it ought to be shared and maybe even shared widely and given the force of policy-- You may mean well, or you may not. I can't read your heart. Nevertheless, we're in an unprecedented situation with lives at stake. So, please.

Posted by Peter Greene at Monday, June 29, 2020
Email ThisBlogThis!Share to TwitterShare to FacebookShare to Pinterest