Graduation in the Age of Covid-19

There are three bridges that run in and out of my small town. Currently, each bridge is flying a batch of banners that collectively list the entire 2020 graduating class at our high school. When the banners went up, a photo of some seniors looking for their names on the banners ran on the front page of the local paper.

High school graduation is a big deal in small town USA. My old high school (the one where I taught for almost forty years and from which I graduated back in the day) holds the graduation ceremony in the city park. Graduates step up onto the band stand while all their family and most of their friends and a fair-sized helping of community people who aren't even related to any graduates all gather on the cool green grass under a canopy of trees, next to a Civil War monument. For years, a colleague and I led the procession of seniors down the sidewalk that cuts diagonally through the park, splitting the huge home town crowd as folks jostled to snap the first pictures of the day. Seniors speak and perform music; administrators speak briefly. 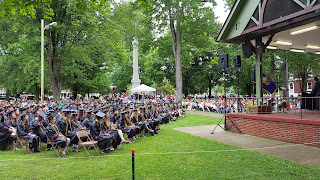 It's a big deal, possibly equaled only by a wedding, though nobody's wedding will be this well-attended by such a broad cross-section of the community. But it serves as one of the few moments in anyone's life in which their status, their place in the world, their fundamental self-image change in just a few moments' time. Small towns like mine are the kind of place in which where you went to high school remains one of your primary identifiers, like job and spouse, for the rest of your life.

The banners are, of course, just one sign that those transformational moments are not going to happen this year. My old school is hoping to stage a "regular" graduation later this summer. If it happens, it will be weird-- not in the park, not with all the graduates there (some will have already moved on to their next chapter), and after the real moment of transition has passed, though after a senior year that fizzled out in a deflated buzz of cancellations and zoom meetings, without even a real Last Day Of School-- well, it will be weird, not at all the same.

The challenge is the same for small town schools everywhere. In my region, one school staged individual graduations, running the graduates and their families through the school auditorium, one at a time, with caps and gowns, diploma handoffs, and photo ops for all. It took four days to cover the entire senior class. Another school staged theirs at a drive-in theater, families in cars, stage walk blown up on the gigantic outdoor screen. About a month ago, staff and faculty of my school loaded up on several different buses and rode around the district, delivering signage and congratulation to each senior.

It will be interesting to see, in the long run, how many of these many improvisations stick. Heck-- we could put up graduate banners on the bridges every year, and when would having your graduation moment blasted across a forty foot tall screen ever not be cool?

But mostly, there is a kind of sadness to all of these ideas, a sense that graduates are being cheated of a really special moment and anything that adults do to make up for it is just a sad, pale imitation, important only because whatever it is, it tells the students that they are not forgotten, that the adult world still cares about them this one last time. In your senior year, you're supposed to be kind of a big deal.

In the long run, this will not be the most critical fallout of the pandemic. High school graduation is also one of those moments that gets its poignancy by carrying the echoes of all that has come before and the foreshadowing of all that will come after. It is like a wedding-- getting married may be a big emotional deal, but what you do abut getting married is not nearly as important as what you do about being married. "Commencement" after all means the beginning of something, and that something is the true big deal. I don't remember much of my high school graduation ceremony; I bet I'm not alone.

If there is a silver lining in all this, it is that adults who could, in any other year, just go through the motions, must this year come up with a deliberate and thoughtful way to express care to their graduating seniors. "Slow down and think about what you're doing" is never bad advice. Wit the loss of regular motions to go through, schools have had to deliberately develop ways to support their departing graduates; it is a pleasure to see so many rise to the occasion. It doesn't remove the crappiness of what has happened.

This coming week would have been the week (by local custom, each area school has a different traditional day and time for graduation, so that none conflict with any other). Instead, it's a week like any other. This is nowhere close to being the biggest casualty of the pandemic; some young adults are going to learn sooner rather than later that in the grown-up world, you often just kind of slide from one part of life into another in ways that are barely perceptible. But it is still a challenge that schools and teachers had to meet. I hope your =s did well.

Posted by Peter Greene at Thursday, June 04, 2020
Email ThisBlogThis!Share to TwitterShare to FacebookShare to Pinterest