Palisades Charter High School has a lot of history. When launched in 1961, it was the most expensive high school in the LA City School system. The state grabbed the farm property through eminent domain; previous residents included the daughter if Francis X. Bushman, and Debbie Reynolds and Eddie Fisher. Members of the Class of '65 were the basis for What Really Happened to the Class of '65?. By 1989, 20/20 aired an episode about the school, characterizing the school as both high academic performance and high drug and alcohol abuse. 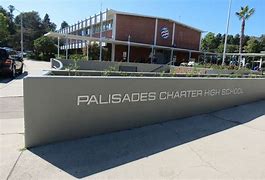 By 1992, enrollment had dropped so far that the district was thinking about shutting them down entirely; instead, staff and parents argued for becoming a charter school, so in 1993, the high school and three of its feeders became the first charter school "cluster" in California. Enrollment bounced back; today there are about 3,000 students at PCHS. The campus, which is big and beautiful, has been used in movies and tv shows, and alumni include J.J. Abrams and Jennifer Jason Leigh.

PCHS is a charter school, and like many other such outfits, they have heard the siren song of the Paycheck Protection Program, the loan program designed to help small businesses stay afloat during the current pandemic mess (the second one, meant to clean up after the first one that ran out of money almost instantly). They are not alone--many charter schools are deciding that, for purposes of grabbing some money, they will go ahead and admit they are small private businesses and not public schools. Two thirds of the charter school businesses in New Orleans have put in for the loans.

What makes Palisades special is that we have video of their board discussing the issues of accepting the loan. (A hat tip to Carl Peterson, who has been watching these folks for a while.)

The discussion of the loan starts in the video about six minutes into the May 12 meeting. Chief Business Officer Greg Wood brings the news to the board that they've found a bank (in Utah) and landed approval for a $4.6 million loan.

If you're wondering if they agonized over issues like tying up four and a half million dollars that might otherwise have been used by an actual small bus9iness that is currently struggling to stay afloat, the answer is, not so much. Wood acknowledges that there could be some rough press with such a move; nobody much cares. A member also mentions that he has friends with small businesses who were not able to be approved. The group gets a little confused about whether or not they're eligible for the loan, and one member says "Well, the answer is, let's get it anyway." Wood says that they could be seen as "double dipping."

They are eligible, and Wood has already applied and been approved pending board approval. Wood doesn't know if the loan will be forgivable. In particular he dances around the idea that in order for the loan to be forgivable, they might lose the freedom to fire staff as they wish.

Payback is steep-- they get two years, with six months before repayment has to start and a big balloon payment at the end. This does not seem to bother the board because they are mostly considering to grab this money in the off chance that they might need it, and if they don't need it, they can just give it back in two years-- basically a line of credit just in case, which I'm sure would be a big comfort to a business that goes under because there is no money for them in the PPP. But this meeting is marked by phrases like "get the money while the getting's good" and "get the loan first...worry about that part later." No payback plan was raised.

A bitter coda to all this. There is just one public comment submitted to the meeting, from a woman who is a Pali High grad and who taught there for thirty years and who is retiring. She's speaking up because the rest of the staff is afraid of retribution. The teachers worked 2019-2020 without a contract, and while the praise and attaboy's they've gotten for making the pandemic-pushed jump to distance crisis schooling are swell, the board could put their money where their mouths are by offering the teachers a decent raise-- particularly since it looks like PCHS is finishing the year with a $2 million surplus. Her comments are read into the record, and then the board just moves on to authorizing the bank that will manage the loan.

Peterson has tried to raise this as an issue for the LAUSD election, with little effect.

You can argue that the PCHS board is supposed to watch out for PCHS and not the rest of the country. That, of course, is what many businesses do, and a charter school is first and always a business. But even a business is capable of exercising some civic responsibility.


Posted by Peter Greene at Wednesday, June 24, 2020
Email ThisBlogThis!Share to TwitterShare to FacebookShare to Pinterest