Why shouldn't high stakes testing be abandoned next year?

Testing in the fall? Let's talk about that idea.

Thomas Toch is one of those reformsters who has managed to bounce from job to reformy job. Currently, he's head honcho at FutureEd, an ed reform advocacy group that bills itself as a thinky tank, and there isn't an educational disruption that they haven't tried to make a case for. This spring they have been vocal in trying to protect the future of the Big Standardized Test, which brings us to Toch's appearance yesterday in The Hill.

"Don't abandon standardized testing in schools next year — rethink it," pleads Toch, offering a plate of weak sauce to make his case. 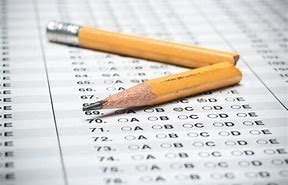 His opening salvo is that students are currently falling behind, and that's not particularly arguable-- crisis schooling has been anywhere from "challenging" to "a freakin' mess." We could (and probably should at some point) have a whole conversation about the use of phrases like "catch up" that imply there is some heaven-set path and some objectively correct speed for students to move along it, and they dasn't fall behind or else... well, something bad will happen, apparently. It's a problematic model for education, but for the moment, yeah, we all get that the usual progress of education is not really happening.

Which brings us to Toch's first thesis--

To catch students up, schools will need to get a handle on exactly how far students have fallen behind, and that means testing.

Nope. That's not what it means, particularly.

Now, at this point, Toch gets one thing absolutely right-- the idea of delivering the 2020 Big Standardized Tests in the fall is a super-awful double-bad idea. "Weeks-long batteries of standardized tests used primarily to rate schools aren't the way to welcome students--and teachers--back from difficult quarantine experiences."

Instead, Toch recommends a battery of "diagnostic measures of reading and math proficiency" so that teachers can figure out where to pick up. Not too many at once, and connected to local curriculum.

This is not an outrageous idea, but it makes me wonder-- what does Toch think teachers do at the beginning of an ordinary school year?

In my experience, what they do is use an array of formal and informal assessments to figure out what, exactly they are working with, to pinpoint what the strengths and weaknesses of those students might be. Seriously-- I did this every fall forever, as did every single teacher I know. Does he imagine that the BS Tests are somehow critical to how teachers deal with their new classes in the fall? Because no-- they're too late to be useful and far too limited in the tiny speck of data they provide. So I guess the response here to Toch is "Thanks for your concern, but the professional educators have this covered."

But his concerns go beyond the fall. In the spring, he wants to get the BS Tests up and running again-- just don't count the results for evaluating schools or teachers. That's not because he's worried about fairness or accuracy, but because he's watching the political angles:

There’s a big political risk in restarting school accountability too quickly. Opponents of standardized testing — led by accountability-averse teachers’ unions and their progressive allies on the left, and conservatives opposed to what they consider an inappropriate federal role in testing on the right — have been waging a half-decade-long campaign to roll back state testing systems.

On my list of reformster tropes I'm bone-tired of reading, you will find the notion that teachers and their unions are opposed to high stakes testing because they are "averse" to accountability. It's wrong, and it's doubly-insulting as it implies that teachers largely suck at their jobs and are weaselly about it. I have never met a teacher "averse" to accountability, but I have met many, many teachers who are "averse" to accountability tools that do a lousy, inaccurate, unfair and just plain bad job of evaluating teachers. But this is the endless refrain of the cult of testing-- folks oppose testing for selfish, craven reasons, and not because the whole high-stakes testing is toxic to real education while failing to do anything that it promises to do.

Toch is rightly concerned that critics see the pandemic pause as a chance to push back high stakes testing even further. This pause has provided a chance for many of us to learn there are certain things we really can do without, and high stakes BS Testing belongs on the list.

But Toch won't rest his case until he offers an old bad analogy for the BS Test that has been given new life by the coronavirus:

Just as widespread coronavirus testing will guide our return to normal life, state testing systems have a valuable role to play in helping leaders map education strategy, track progress and back the nation’s neediest students.

Nope. Not even close. For one thing, coronavirus testing (should it ever get off the ground) is a binary test-- you have the virus or you don't. There's is no educational test that looks for a binary answer (you are either educated, or you aren't). For another, any coronavirus test will have been evaluated to determine that it is a true proxy for what's really being considered-- viral infection. After decades, there is no evidence that the BS Tests are good proxies for any of the things they claim to measure-- student achievement, teacher quality, school quality, student life outcomes.

Toch's final sentence underlines where he really is-- calculating political leverage rather than considering the actual effects of the tests.

But attaching stakes to test results too quickly would play into the hands of accountability opponents at a time when we need smart testing more than ever.

It would also waste precious instructional time, waste resources, and provide meaningless bad data. Look-- if testing really worked, if it really told us all the things that guys like Toch want to claim it does, don't you think teachers would be clamoring for it? If it were an actual valuable tool, don't you think that teachers, struggling with spotty resources against unprecedented challenges, would be hollering, "If I'm going to try to do this, at least find a way to get me those invaluable Big Standardized Test!"

But no-- in the midst of this hard shot to the foundations of public education, a lot of professional educators are taking a hard look at what is really essential, what they really need to get the job done. The Big Standardized Test didn't make the cut. We don't need the "smart testing," especially since it isn't very smart anyway. We just need smart teachers with the resources they need to do the work.
Posted by Peter Greene at Wednesday, May 27, 2020
Email ThisBlogThis!Share to TwitterShare to FacebookShare to Pinterest