When this originally ran at Forbes.com, there was still some qujestion about the premise. Since then I've updated it with new info from DeVos herself.
For many conservatives, one of the greatest sins perpetrated by Obama’s secretary of education was using the powers of his office to bypass the legislature. Arne Duncan oversaw Race to the Top, which was instrumental in pushing Common Core and other preferred policies into schools across the country. Now Betsy DeVos is using nearly identical tactics to push for her own favorite educational ideas. 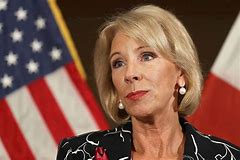 Race to the Top was a $4.5 billion program that was part of the American Recovery and Reinvestment Act of 2009, a stimulus package meant to help reverse some of the effects of the Great Recession. States would have the opportunity to get education grants, but they would have to compete for the money by showing how closely they could adhere to the administration’s goals of college- and career-ready standards, high stakes testing, teacher evaluation, and data collection. The administration had tried and failed to get these goals passed into law through Congress. The financial pressure of the Great Recession and the looming penalties for the unachievable goals of No Child Left Behind (100% of students scoring above average on the Big Standardized Test) gave Duncan leverage to bypass Congress entirely. And rather than providing funding for all schools in all states, the program picked winners and losers.

Many conservative critics argued that RTTT and the waivers that followed were illegal. The backlash against Duncan was so strong that the successor of NCLB, the Every Student Succeeds Act, explicitly stripped the office of power to behave as the nation’s school superintendent.

Betsy DeVos has existed for most of her tenure between a rock and a hard place—on the one hand, believing firmly that the federal government should let all power over education rest with the state, and on the other hand, believing that traditional public education is a “dead end” and should be replaced by other mechanisms. She has tried to get Congress to back some of her ideas, such as the “Education Freedom Scholarships” plan, but with little success. Some observers have watched carefully to see if she would finally grab the levers of power in the same way her predecessor had.

She has finally reached for the levers.

Congress has passed a massive stimulus bill meant to reverse some of the effects of the pandemic shutdown. A good-sized chunk is aimed at education, and Secretary DeVos has announced that states will have a chance to win grants, but they will compete for money by showing how well they will implement some of the administration’s favored policies.

States may compete in “one of three categories.”

First, microgrants for families. This is an idea that DeVos has floated previously. “Microgrants” is a new name for vouchers, specifically education savings accounts, in which families are given tax dollars to spend on a wide variety of educational items or activities.

Second, cyber-schooling on a state scale, a la the Florida Virtual School, a program that has experienced troubles, but is seen as a model by cyber-schooling advocates like DeVos.

The third option is, well, something. “New, field-initiated models for providing remote education not yet imagined...”

As with Duncan’s preferred policies, there is no body of evidence to suggest that these ideas are good investment of public tax dollars. Cyber-schooling on a large scale is repeatedly shown to be ineffective. ESA, besides involving the same old issue of public tax dollars going to private religious institutions, have also presented problems with oversight and accountability; if every family is spending tax dollars, how does the state monitor that? In one case, Arizona parents were found to have spent $700,000 of ESA money on things like cosmetics and clothes.

The grant amounts are not huge, but the hope is that current financial pressures will push states to fight for the dollars by demonstrating their compliance with DeVos’s preferred programs.

So once again, a secretary of education, frustrated that Congress will not give their policy preferences the force of law, uses the leverage of stimulus funds during national economic troubles to push states to adopt their policies, picking winners and losers for the funding. Arne Duncan may not agree with Betsy DeVos’s policies, but he certainly can’t criticize her methods.


Nor, for that matter, can she any longer criticize his. Since this piece originally ran, DeVos has done an interview with Cardinal Timothy Dolan (New York) who has been a leader in the Catholic Church's decision to shill for the current administration in exchange for money for their school system, a goal which DeVos fully embraces.
In that interview, well-covered here by Matt Barnum at Chalkbeat:
In an conversation with DeVos on SiriusXM radio, Cardinal Timothy Dolan, the Catholic archbishop of New York, suggested that the secretary was trying to “utilize this particular crisis to ensure that justice is finally done to our kids and the parents who choose to send them to faith-based schools,” including through a new program that encourages states to offer voucher-like grants for parents.
“Am I correct in understanding what your agenda is?” Dolan asks.

She's pursued the goal of funneling public tax dollars to private schools (particularly religious ones) and now she is using Duncan's technique of using competitive grants and the levers of power that come with her office to push that policy. And she's no longer feeling shy about it. Mind you, as Barnum notes, she tried to blunt the criticism in an interview with Rick Hess (AEI):

“I don’t see any parallels, to be honest. Race to the Top was wholly designed by the Obama administration to advance their policy priorities,” she told Rick Hess of the American Enterprise Institute, a conservative think tank. “Our discretionary grant competition is completely the opposite. … Yes, it is focused on reforms, but they are reforms that any intellectually honest person would have a hard time arguing aren’t needed.”

"Completely the opposite?" That doesn't even make sense. Is her argument is that Duncan was doing it for bad reasons, but she is doing it for good ones? That Obama administration policies were for their own selfish reasons, but she's on a mission from a higher power? At root, it's the oldest politician argument in the world, the personal intellectual defense against charges of hypocrisy. Because it's only hypocrisy if you think the same rules apply to everyone, but if you believe that there are different rules for people who are right and people who are wronmg, well, then-- no hypocrisy at all.

Short form: DeVos has become Duncan. Heaven help public education if she stickms around for four more years.
Posted by Peter Greene at Thursday, May 21, 2020