Pennsylvania House Speaker Mike Turzai has never been a friend of public education in the Keystone State, and he has generally been pretty clear about it. But Monday he got extra Mike Turzai-ish when posting a six minute video attacking the state education head, teachers, schools, and teachers.

Just for context, let me mention two things-- Turzai is not running for re-election to the House, and he might like to run for governor of the state.

The prompt for his little videoutburst was a statement from the state education secretary Pedro Rivera that, given current info, PA schools might not open in the fall. "We're preparing for the best, but we're planning for the worst," he said. Need to put health and safety of students first, he said. This so enraged Turzai that he immediately a week later put up a Facebook video. 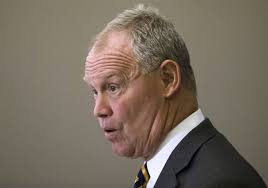 Turzai starts out by quoting the "schools might not be able to open in the fall" part and then, just twenty seconds or so in, he let's loose with a rage and disgust face and asks "Who are you, Secretary Rivera, to be the dictator of whether our kids are getting educated or not?" while his face adds "when you are clearly some sort of loathsome slug." It's an ugly moment, made even uglier because Turzai's eyes shift to the side so he can read this line. But it's also ugly because it sets a tone. Because Turzai could have said something like, "I think this is a bad idea and I disagree with it" or "I thiunk we need to take another look at this conclusion" or even "I respect Secretary Rivera's professional opinion, but I think he's wrong here." There's no reason to go full ugly on this unless, say, you believe that attacking the governor and his administration for being dictators and freedom-haters is a winning political issue and you would rather grab a winning political issue than look for an actual solution to problems. Especially if you want to run for governor.

Thirty seconds in we've got the general gist here, but there's more. And most of it is insulting.

"For goodness sake-- are kids even being educated right now?" This will not be the first time that Turzai, who once suggested that teachers are a special interest who work in a monopoly and  don't care about kids, will suggest that teachers aren't doing jack.

"Are you going to turn everybody into a cyber-school?" This is the moment that most suggests to me that Turzai is not being entirely honest in this video, because  he has spent most of his career pushing charters and cyber-charters. I find it hard to believe that he wouldn't cheer if every student was cyberschooling.

He wants you to know that every public school worker is being paid, and he's prepared a graphic with the number. He also wants you to know that the PA pension fund for public school employees is really expensive (got a graphic for that, too). He mentions that the pension costs are huge; he doesn't mention that it's largely because the legislature got te fund hammered in the 2008 crash.

"The fact of the matter is, Secretary Rivera, kids. have. dreams." Again, more effective without the reading side-eye. He will now read off a list of the many things students like to do, like act and sing and perform in real concerts and dance and do welding and-- it's a good list, but now hold on--0

Hard right turn into doctor and science territory because all of those things can be done safely by kids if they don't have an underlying condition! This is not exactly true, though what always strikes me as bizarre about this argument is that it assumes that children do not have adult family members. In the "children aren't hurt by corona" universe, do we imagine children are quarantined away from adults?

"The fact of the matter is, kids can develop herd immunity." I have no idea what is supposed to mean.  Herd immunity has to involve the whole herd, right? And some of the herd will become immune and some of it will become dead-- correct? If you have a medical degree, feel free to correct my wofrk in the comments.

Now Turzai warns that if Rivera hasn't developed a plan "then we will have to rethink education fully." The "rethink education" part is another sign that we're reading out of te education disruptor playbook here.

Teacher salaries. Turzai wants to mention that we have the second highest average teacher salary and the third highest average starting salary. Also, the average member of my household is four feet tall. Whatever-- Turzai just wants you to know that teachers get paid too much. Fun fact: PA state legislators are third highest paid in the country; our legislature is one of the most expensive. I'm mnot being cheap and petty (okay, not JUST cheap and petty)-- throwing these kinds of numbers around without context or a point other than "Look at this and be mad!" is not helpful or useful. Also, happy Teacher Appreciation Week.

Next, Turzai declares that the department should have a plan so that schools just "flip a switch" and go instantly from full day in school to full day distance school, then "what are you doing over at PDE? Issuing edicts?" For the record, a full day of distance learning is a lousy idea. The flip a switch idea just shows a profound lack of understanding of what is involved in education and school.

Now we're back to "is anybody doing anything" rant materials. Summed up wit "is value being added" which is just ridiculous. You add value to manufacturing goods, not human beings. But Turzai is going to lean on the idea of measurables. He wants numbers, dammit.

He wa ts to see an analysis across the stater. He wants teachers to call students with IEPs every day, which I'm guessing would be hugely annoying to the families of those students. But he really wants that-- "Please tell me someone is calling those students every day" They have dreams, too. Also, personal contact. Phone calls. "And you act so cavalier..." and again, I didn't see video, just the writeup, but I didn't see cavalier in Rivera's comments. "Do you understand the pressures and burdens you're putting on working families?" It's a hard thing to do all this cooping up and hemming in and running school at home and he's not wrong but then we're back to the "who are you" and I guess "a public servant trying to make the best calls he can with the same limited info that everyone else has" is not the correct answer for Turzai. No, he's the education dictator, and he did this without input from legislators or publicly elected officials (or teachers, ether, but who's counting)

"You're going to wear it, if you take away the dreams from those kids" And this line is delivered with so much feeling that you would think Turzai was reacting to something that just happened.

"You have a lot of answering to do." I think he's reading this off paper rather than a screen.

Now we're on to the idea that in some counties, we should be talking about getting kids back to school. I'm in one of those counties and I'd respectfully point out that opening the schools wouldn't mean that people would go back. Turzai has a thought-- go back for just half-days so that social distancing could occur, which is the kind of thinking we get from lots of folks who don't actually send time in schools.

"Or are you telling us that school buildings are now obsolete?" If so, we need a new plan. But I bet that's not what he's telling us.

He wants-- or rather "we want"-- a thought out plan that respects parents and kids. and respec ts their dreams and hopes, and has measurables. And his closing line--

"I haven't seen any leadership from your office at all."

And all sooooooo angry. Well, I get that, sort of. We're mostly on edge and tense. But Turzai either needs to take a step back and assume that just maybe there are people who disagree with him honestly and with good intent for the best outcome, or he needs to stop trying to milk conservative anger at the governor for his own political benefit. I'm increasingly concerned that the "You want to be a dictator" versus "You want to kill grandma" rhetoric isn't helping and that some folks are getting more invested in scoring political points than getting us through this.

When I started writing this, I was really angry. Now I'm just sad. Turzai has never been a friend of public ed, nor do I remember any of his crusades to cut public ed funding being accompanied by any concerns about children's hopes and dreams. It'll be interesting to see how he adapts all of that to a governor's race.


Posted by Peter Greene at Tuesday, May 05, 2020
Email ThisBlogThis!Share to TwitterShare to FacebookShare to Pinterest