This Case Could Break The Wall Between Church And School

Three weeks ago, I wrote about the Espinoza v. Montana Department of Revenue case for Forbes, trying to explain why it would be a big deal if the Supremes decided to hear this case. One thing has changed since then-- the court has decided they will hear the case.

This is a big deal. Here's a slightly modified version of that Forbes piece to serve as an explainer for why we need to pay attention.

This summer the US Supreme Court has decided to hear Espinoza v. Montana Department of Revenue. Its decision will have huge repercussions for public education. To grasp why this case matters and why it's coming up now, there are two pieces of background you need to understand. 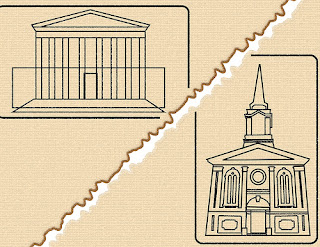 Tax credit scholarships are yet another variation on a school voucher program. With vouchers, a family picks the school it wants its child to attend, and the state hands that child's "share" of education funding to that school. The problem is that when a family chooses a religious school (as is often the case), that can run afoul of the separation of church and state in general, and Blaine Amendment laws in particular. The Blaine Amendment was a failed Constitutional amendment that prohibited spending tax dollars on sectarian schools; 38 states adopted it for their own constitutions. It's not an easy law to defend, because it rose out of nativist reaction to immigrant Catholics, even if does fit with the wall between church and state.
Tax Credit Scholarships do an end run around the wall. A business or wealthy individual gives a contribution to a special "scholarship" organization that then hands out scholarships to private schools. The state lets the business or wealthy individual count that contribution as some or all of their tax liability. Think of it this way: I'm the state, and you owe me $100. I am not allowed to gamble, but if you give that $100 to my bookie instead, I'll consider us square.
Rules vary from state to state (in Georgia, for example, contributors can actually turn a profit on the TCS donation). But one feature is constant--whatever money is fed into the TCS represents money subtracted from state revenue. This, it should also be noted, is the model for Betsy DeVos's proposed Education Freedom Scholarships. In all cases, these are vouchers dressed up with fancy accounting.
A Church Parking Lot In Missouri
The other factor here is Trinity Lutheran v. Comer. The case seems like small potatoes; a church in Missouri wanted to apply for a public monies grant to help resurface its playground. It was disqualified because it's a church. The case ended its five-year trek to the Supreme Court in 2017, and Chief Justice Roberts said, "The exclusion of Trinity Lutheran from a public benefit for which it is otherwise qualified, solely because it is a church, is odious to our Constitution … and cannot stand.” This was a big deal because, as Bloomberg noted:

Some of the majority tried to rein in the implications of the case by noting it was a ruling strictly about playground resurfacing. Justices Gorsuch and Thomas, however, indicated that they believed that discriminating against religious practices was not okay "on the playground or anywhere else."
Meanwhile, In Montana
Montana's legislature tried to get a voucher foot in the door with the Montana Tax Credit Scholarship Program, which allowed a not-very-staggering tax credit of $150. There was just one problem; the Montana Department of Revenue wouldn't implement the program, claiming it broke the law. The Montana Supreme Court agreed that the tax credit benefited religious schools and therefore broke the rules.
The case has found its way very quickly to the Supreme Court, and the long list of very conservative and religious school choice fans filing amicus briefs lets us know just how much some folks are hoping the Supremes will reverse Montana's own high court. Cato Institute, EdChoice, Christian Legal Society, Liberty Justice Center, Becket Fund for Religious Liberty, Wisconsin Institute for Law and Liberty, Georgia Goal Scholarship Program, Alliance for Choice in Education, and former governor Scott Walker are among the many who have been urging SCOTUS to take this case and run with it.
The case matters because it could extend the Trinity Lutheran notion that free exercise beats the establishment clause. The case matters because it could open the door wide to the use of public tax dollars for private religious schools. The court could also drive a stake through the heart of voucher programs aimed at shuttling public funds to private religious schools, no matter how clever and convoluted the voucher scheme may be. That last possibility seems less likely, because, as with many issues beloved by the right, this is an issue that may be facing the friendliest court in many decades. This is definitely one case to watch for this summer.
Posted by Peter Greene at Monday, July 01, 2019
Email ThisBlogThis!Share to TwitterShare to FacebookShare to Pinterest