Does The Most Interesting Teacher Pay Proposal Belong To A Billionaire Friend Of Trump?

Stephen Schwarzman might have an idea. Schwarzman, cofounder of the Blackstone Group, has been named a Bloomberg Most Influential person of the year more than once, and in 2007 he was one of Time's 100 Most Influential people of the year. He is a long-time friend and advisor of Donald Trump, including help set up Trump's Strategic and Policy Forum. He has given away a great deal of money and put his name on a wide variety of enterprises, from the Schwarzman Scholars program for global leadership at Tsinghua University in Beijing, to having his name inscribed six times on the New York Public Library. You may remember him from a donation to his old high school that turned into a flap about renaming the school, but he is most recently in the news for a huge donation ($188 million) to the University of Oxford to change the way the humanities departments at Oxford interact, and to study the ethics of artificial intelligence. That's in line with his donation last year to M.I.T. of $350 million to anchor a new billion-dollar Stephen A. Schwarzman College of Computing for the study of artificial intelligence. 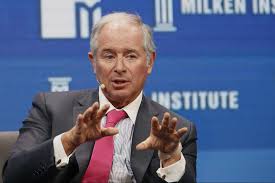 Schwarzman is well connected and he lives large, but some of his ideas do always not match what we might expect from the typical plutocrat. His interest in AI ethics, for instance, is in part focused on the problem of displacing human workers. And when he spitballed an economic Marshall Plan for the middle class in April, he identified "income insufficiency for the bottom 50% of society" as a major problem, and said finding a solution "is not optional." He advocated for a minimum wage increase, and for more CTE style education.
In education, he shares a common misconception; he thinks that when he was young, the US was number one in primary and secondary, and now they have slipped. It's unclear what measure he's using, but if he is commenting on PISA testing, the golden age he remembers from his youth never existed. The US was never number one.
But his most intriguing suggestion was his third one. Teachers are central to education, he says, so "we should make teachers pay no tax."
"It's not just money," he adds. "We need to make teachers a special class in our society."
And then the interviewer cut him off. I reached out to Schwarzman to elaborate, but did not receive a reply. But let's look at this.
The financial side of this is interesting. Several Democratic candidates have proposed raises for teachers, but there are plenty of problems with trying to collect federal money and somehow spread it down to local school districts. How will distribution be determined? How will federal and state authorities move the money around?
Let's assume that we're only talking about federal tax exemption for the moment. Teacher Tax Freedom would give almost every teacher in the country an instant raise. For some it would be a few thousand dollars. In states and districts where the pay is well below the national average, the raise would not be huge--in fact, for some folks struggling with low pay and a family, the tax freedom would give them almost nothing except a respite from tax form paperwork. From the local school district's point of view, it is an instant raise that doesn't cost them a cent. In fact, it reduces the amount of work they have to do to deal with deducting taxes from paychecks.
Of course, there would be lost revenue for the federal government. The exact amount is impossible to calculate, but let's look at some rough numbers. According to the NEA, the national average teacher salary in 2017-2018 was $60,477. Federal taxes on that amount, for a single person, would be, according to tax calculators, around $6,500. Add a spouse and two kids and that drops to $3,764. But the average tax bite will be lower because teachers on the lower end of the scale fall under a lower effective tax rate. There are roughly 3.2 million public school teachers. If we arbitrarily set the average tax bite at $3,000, we get a loss of under $10 billion to the federal government.
That's roughly double the hole that DeVos would like to open up in the budget with the proposed $5 billion tax credit scholarship program. One could argue that Teacher Tax Freedom would put that $10 billion in the hands of people all across the country, to be spent in the local community in ways that would stimulate the economy. But we would be trading a cost to the government for teacher financial gains that would be limited. All the tax forgiveness in the world does not turn a $39,000 salary into a $60,000 salary.
But there is no discounting the second part of Schwarzman's explanation. Teacher Tax Freedom would clearly mark teachers as a special class in society. Closing the respect gap is no small thing, and a proposal that did so would have value beyond dollars and cents (though if more respect for teachers were there, it would be followed by dollars and cents). Education policy in the last few decades has been exceptionally creative in the many ways it has found to treat teachers with disrespect; Schwarzman may have stumbled on a way that policy could actually work in the other direction. It wouldn't solve all the issues of respect for teachers, and it wouldn't solve the problems of teachers who are working multiple jobs to get by-- you can't eat respect. But it wouldn't hurt and, unlike more complicated and ambitious plans, it would be really easy to implement. We'll wait and see if anyone besides Schwarzman decides to talk about it.
Originally posted at Forbes