FL: Trees and the Taj Mahal

Corcoran was previously the speaker of the house, where he pushed a variety of privatization moves. In particular, he pushed the "Schools of Hope," a cool plan in which public schools that were having trouble would be targeted for direct charter competition, with lots of incentives for big out-of-state operators to come and rake in some Florida taxpayer bucks. In other words, when the state finds a public school that needs some extra help and support, they instead call in private operators. Like finding a traveler beaten and hurt beside the road, and instead of calling a doctor, you call some vultures.

Yes, if you haven't been following events in Florida, they really are the worst. But then, they have installed a group of strongly anti-public education folks in all the education oversight positions, as well as powerful advocacy groups with lots of clout,  so none of this comes out of left field. If any state is well-positioned to completely eliminate public education, it is Florida (even if they do attempt to hide the attempt by redefining "public").

Anyway, Duval school system includes several schools that are struggling, and they have a brand new superintendent, Dr. Diana Greene (with a background in actual education).

Corcoran gave her three choices. One of the choices was hand over some schools to IDEA, a Texas corporate charter chain founded by a pair of Teach for America products devoted to the No Excuses model.

That was the choice Greene was supposed to pick, but instead she went with working with the local community to salvage the schools they were committed to. Corcoran was not happy. In fact, he stewed aloud that perhaps it was time for the state to take over the schools that he wanted to hand off to IDEA. IDEA is on Corcoran's favorites list-- they have been given the green light to start moving into Florida and start opening those Schools of Hope.

Meanwhile, this summer has seen Corcoran throwing more snits in Greene's direction. The school district has been working on a proposal to use a half-cent sales tax to fund a major capital improvement program for the district. Corcoran is not a fan, and in explaining his non-fanness, he also shared some of his educational philosophy:

“You can put every single one of those kids in a ‘Taj Mahal’ and he’s not going to suddenly go from a poor student to a great student,” Corcoran said. “I’ve been very vocal in my opposition to two billion dollars to build new ‘Taj Mahals.’ That’s not a solution.”

“I’ve been on record: You can teach Plato under a tree,” Corcoran said. “That’s what I say all the time.”

Now, I don't entirely disagree. A good teacher can accomplish an awful lot regardless of where you put her. But the anti-Taj Mahal pro-tree comment is a curious one, coming from the man who, as House Speaker, helped secretly hammer out and push through laws that steer a ton of public money toward charter school. The infamous HB 7069 not only set up the Schools of Hope, but created a rule saying that public schools must share taxpayer funding earmarked for construction. Oddly enough, Corcoran did not suggest that anyone wishing to start a charter school should just go find a nice tree to stand under. 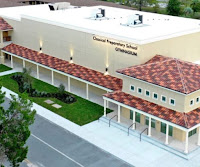 It seems unlikely that he gave his wife charter tree advice when she started Classical Preparatory School in 2015 (now expanded to a chain) or when she decided to sit on the board of Tallahassee Classical School. The proposed building for one of the Classical Prep schools certainly doesn't look as if the plan is to just meet under a tree, nor does the virtual tour of campus suggest that school plans to focus on tree-based learning. Though you can see some trees. You will not, however, find an audio clip of Corcoran saying to his wife, "Anne, why all these buildings? Why don't you just teach the students under a nice tree. Maybe a maple. Or a larch."

Greene responded to Corcoran's Taj Mahal charges by pointing out that Duval has the oldest facilities in the state, some of which date back a full century. Some repairs are certainly called for.

There's no question that Duval has some challenges to face, including a crushing level of poverty. But asking that students attend school in safe, functional facilities is not demanding the Taj Mahal. Privatization should not be the solution that comes up before, say, adequately funding public schools. Nor should a state's education chief be arguing that only certain students deserve to have nice facilities. Corcoran has long established that he is a fervent opponent of public education in Florida. Before he continues directing his tantrums at Dr. Greene, perhaps he should just go take a seat under a tree somewhere and take a deep breath.
Posted by Peter Greene at Thursday, July 25, 2019