Yesterday the NEA did quickie interviews with ten of the Democratic candidates, ranging from the front-runners like Sanders and Warren all the way down to (checks notes)-- some guy named Tim Ryan who is apparently also running. 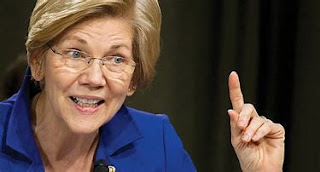 There were plenty of fine moment and plenty of pandering, and, it has to be noted, plenty of issues that went unaddressed by some candidates because they didn't get asked a question about them. If, like me, you found the streaming experience frustrating, you can watch the whole thing over on YouTube.

The favorite headline for coverage involves all the folks who have jumped on the Make A Teacher Secretary of Education bandwagon. But there were several moments I found more important-- especially this next one.

Elizabeth Warren was handed a question about ending high stakes testing (not even "would you" but "how would you") and she started out by offering her own version of putting someone from public education in the office, then she moved on to this:

"It's about our values," she says as she pivots. She invokes her special needs teacher background (again) and says, "This notion that it's all about testing, that it's all about what somebody far off in the state capitol or far off in the national capitol says here's what constitutes success, and worse yet, here's what constitutes failure-- no, that's not what education is about."

"Education is about what goes on in the classroom," she continues. A teacher sets a goal and a teacher knows when a student has met that goal. "We do not need high stakes testing." That gets big applause, and then Warren adds something that I think is important.

"I think this goes to the fundamental question of respect for our teachers. Too many folks seem to have gotten the idea that teaching is kind of like, y'know, working on an assembly line, and we'll just test your widgets to see if they're coming out all right, you must be a good teacher, and if they don't meet the standards set somewhere else, you must not be. No, that is not what teaching is all about."

She winds up with some nice words about teaching and focusing on children and that's not testing and teachers need to be front and center.

The Warren record on testing has been spotty and a little scary-- in 2015, she came down on the side of needing testing in order to know if schools are doing a good job with their widgets or not.

This clip doesn't get into the more concrete ways in which high stakes testing has damaged US education (narrowing and refocusing the curriculum, etc), and that's not a knockcause Warren was racing the clock. But it does show an appreciation for one of the underlying features of testing-- the foundational idea that teachers can be neither trusted nor believed, and therefor we must have tests, because somehow those are more reliable and trustworthy.

Like many of the candidates (cough*cough*Biden*cough) she would be well-served by talking about what she used to believe and how she has come to understand that she got parts wrong. And I still worry about some of the company she keeps. However, it's July, and my Christmas shopping is more urgent than my need to pick a Dem candidate.

But here she has nailed a policy idea that has been missing from all the platforms. Modern charters, as currently implemented and regulated, are a problem. Getting people to drive policy who aren't rank-but-rich amateurs would be great. But nothing in the last twenty years of education has done more far-reaching and pervasive damage than high stakes testing. If the candidates want a bandwagon to jump on, I recommend this one.
Posted by Peter Greene at Saturday, July 06, 2019
Email ThisBlogThis!Share to TwitterShare to FacebookShare to Pinterest